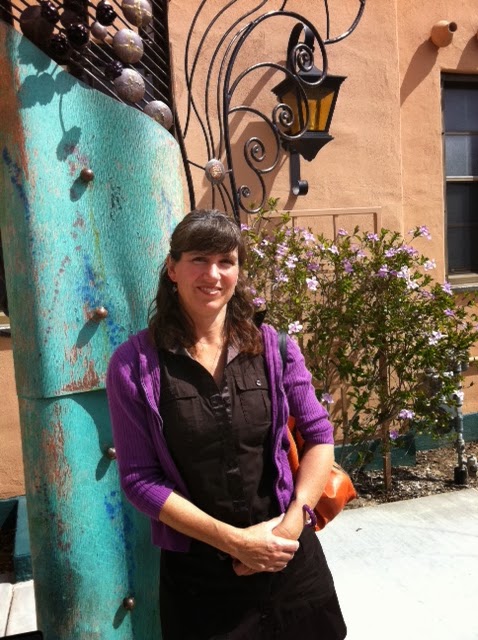 Though we relocated to San Diego just over a year now, I’ve only recently discovered San Diego Writers, Ink, located just off Pacific Highway at NTC Liberty Station. I seem to learn the city best by showing out-of-towners around, this week my sister (I’m overjoyed to spend time with her). A writer herself, my sister willingly came with me to a Brown Bag session for a wonderful hour of on-the-spot writing at the Ink Spot. Here we are, pictured in front of the Alfonso Arambula Archangel statue gracing the courtyard below.

I will be teaching a four-hour poetry workshop (Poetry Play: A Tour of the Forms—from haiku to sestina) for San Diego Writers, Ink Saturday April 12 from 12:30-4:30. After sharing our fast-writes with our newfound writer friends, we also cruised the Inspirations Gallery next to the Ink Spot where we fell in love with the mosaic horseshoe artwork of Jill G. Hall.

(We went back today--March 18, and wrote, and I took a few photos of the horseshoes for you...here they are.) 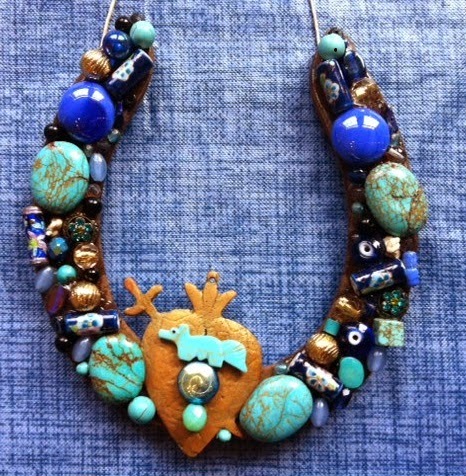 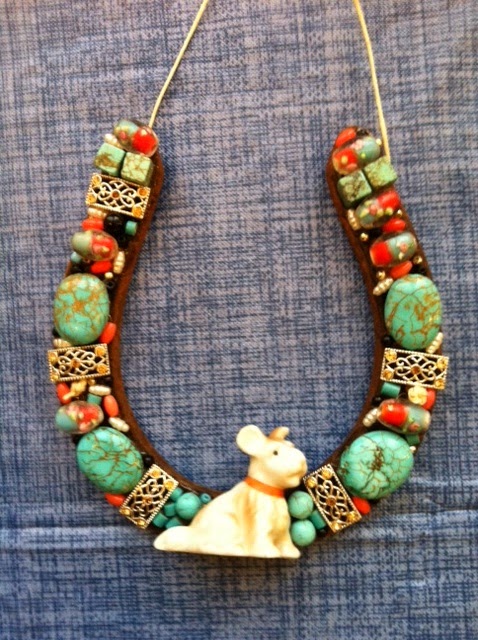 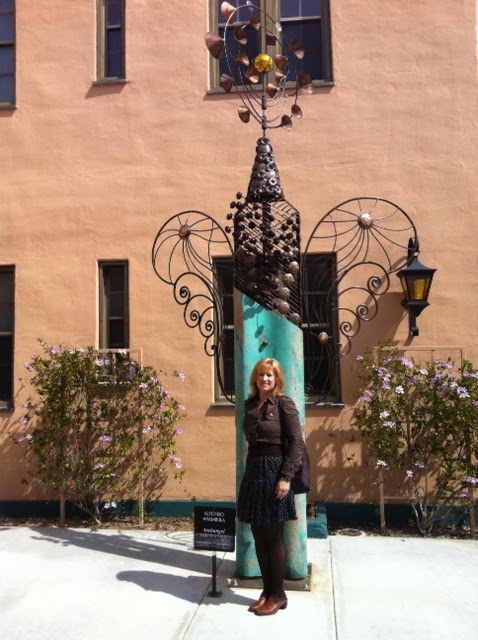 Next stop for two sisters on a sunny San Diego afternoon outing before kid pick-up: the exquisite Chi Chocolat coffee shop located just below Inspiration gallery and the Ink Spot writing room. We sampled (ok, devoured) our truffles: purple dragonflies featured a lavender flavored interior, green owls (see the “hoot” spelled out? downright adorable) featured mint, the nova oval a Mexican spice interior, and last, pretty much the ace for us:  the 1 of diamonds with its soft cardamom dark chocolate filling. We sat admiring a beautiful wooden chess set at the table next to us perched waiting for players and savored our coffee, truffles, and memories of Narnia prompted by the lantern gracing our table. 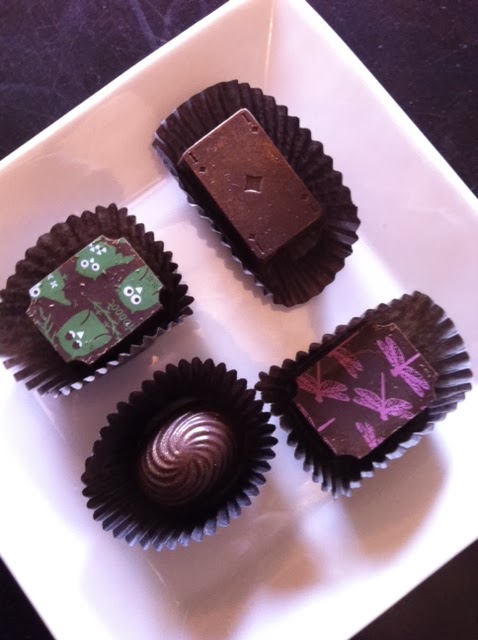 I'm re-reading The Chronicles of Narnia to my youngest son from an original set of volumes that belonged to my grandmother. Coincidentally earlier this month, while cruising the library for poetry volumes, I discovered The Magician’s Book, A Skeptics Adventures in Narnia by Laura Miller. I skimmed the book, intrigued, but a bit hesitant to quell the joy of rekindling childhood memories by analyzing the methods or intentions of C.S. Lewis. A quote from Miller's website about The Magician's Book reads:

In her search to uncover the source of these small books’ mysterious power, Miller looks to their creator, Clive Staples Lewis. What she discovers is not the familiar, idealized image of the author, but a man who stands in stark contrast to his whimsical creation—scarred by a tragic and troubled childhood, Oxford educated, a staunch Christian, and a social conservative, armed with deep prejudices.

As a child, I went some Sundays with one grandmother to Catholic church and some Sundays with the other grandmother to Christian church; later my parents took us on an adventure to an Illinois commune where our leader borrowed from a great many religions across centuries so that by the time we were turned loose into the world as young adults to think for ourselves, my siblings and I each found our way to our own understandings of source or God. Without a solid reference for the symbols of Narnia early on, I enjoyed them more or less as images without context or much associative halo.

I learned from Miller that C.S. Lewis and Tolkien were friends, though they were not necessarily mutually enamored of one another's work. When I was five, my father read us The Hobbit and The Trilogy, so both authors figure as the heavyweights of my early image-scape. Miller’s book confirmed for me the stubborn grip my child’s heart still has on that numinous imagery of Narnia (wardrobe and magician's pools as portals into parallel worlds, a lion unafraid to offer his mane to the hands of little girls). Child-brain trumps adult brain, forgiving the possible patchwork of sources and images, the possibly weak array of girl characters should one extend them into womanhood.
As a mother, I understand more than ever the responsibility of defining and living one's "happily ever after," our outside-the-gender-box female strength still in need of claiming (exhilerating and frightening by turns, but worth the risk). See Justine Musk’s TedxOlympic Blvd Women talk, The Art of the Deep Yes, or read the transcript, in which she states “The deep yes is the right to dream your dreams and live an authentic life as the hero of your own unfolding epic. It’s a yes to all your imperfections and the knowledge that you’re fabulous anyway."


In hopes that a mother of three can still aspire to adventures and the open road, I’m applying to Amtrak's Free Residency for Writers for one of 24 writer residencies (boy will they be shocked at the flood of applications. March 14 update: according to The Wire over 7000 have applied thus far)… I mean, who doesn’t want to get away for two to five days on a train and take along a blank notebook? To ruminate in one's own sleeper car equipped with desk and private bed and outlets? With a book tour on the horizon in the fall to celebrate first poetry collection (forthcoming from Saddle Road Press) and first anthology I’m editing of the stellar poems and interviews by the writing mothers we’ve published at The Fertile Source (forthcoming from Catalyst Book Press), I hope Amtrak will send me out to the heartland in time to give a fall reading or two with other writers featured in our anthology (Laurie Klemme and Tonja Robins). 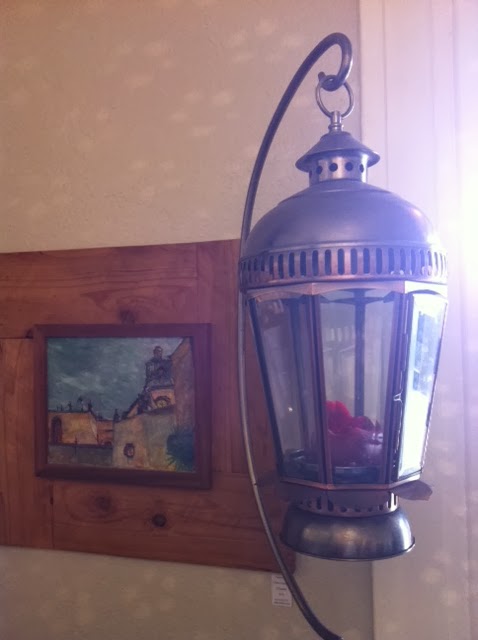 Here’s a link to a CNN blogpost about the writer responsible for throwing out the idea, Alexander Chee, and the first writer responsible for tweeting about Alexander’s idea (thus garnering Amtrak’s attention and completing the first successful unofficial residency): Amtrak's Free Residency. I even opened an Instagram account (I imagine chosen writers will be tweeting, facebooking, and instagramming their way across the country). With less than two minutes on Instagram, my daughter swapped out my profile photo in favor of the one with the cat riding on my shoulder...how can she already have my password?

Where would you go and what would you write? The last time I traveled on a train, it was twenty years ago... when I took advantage of a brief holiday from my MFA program in the heartland in order to confront a love triangle...rode the California Zephyr, if I recollect accurately....but that is a story...or a series of poems...I would write...if I could, alone on a train again for a few solid hours...with green eggs and ham...

[Added March 14: A cautionary note by a writer scrutinizing Amtrak's terms and conditions:
Rights and Concerns: Amtrak Residency. I am with the blogger on hoping Amtrak will modify this portion of the application.

And here's a post from The Wire in which Amtrak addresses some of these concerns: Nervous Writers Have Questions about Amtrak's Residency (And Amtrak Answers Them For Us)

and another From Scratch Magazine, regarding tax information as well:
All Aboard! Irrevocably, Absolutely, In Whole or In Part! )

and one from The New Yorker, Writing Powered by Amtrak] Now back to the fun:


One Train May Hide Another, Kenneth Koch (poets.org)


Always on the Train, by Ruth Stone (poets.org)


Related:
Turning a Train of Thought Upside Down, An Anthology of Women’s Poetry, Edited by Andrena Zawinski (Scarlet Tanager Books)
Posted by Tania Pryputniewicz at 5:49 PM

On my #AmtrakResidency with you and several other women writers, I would take the northern route to catch spring arriving in the plains, to ease our wintered souls with vistas and pull my Southwestern colleagues in to vernal pleasures. We'd write on our projects and together launch a letter writing project, writing letters to our children from our "Rolling Rooms of Our Own". It would be ever so good. Maybe the chocolate people would sponsor us? I am so glad you are finding your community there Tania...in CA. I just hope we get a residency at the same time. xooxox S

Suzi, your comment is a prose poem itself...a project to undertake for sure, I love it..."Rolling Rooms of Our Own" is a fabulous phrase. We will have to go on self-proclaimed retreat or residency...I can feel it coming our way! Sweet idea on the sponsorship...hadn't thought of that...