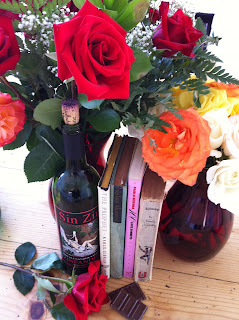 The lines of the boys of poetry filled my head this Valentine’s Day (Thomas, Arnold, Pablo). By dusk, in the glow of night approaching and a lifetime’s habit of threshing the day for its beauty with attendant promise of rising at 3 am to write, I forced a reading of In My Craft or Sullen Art upon my unsuspecting husband just to get to those last lines describing how the poet “labours by singing light / Not for ambition or bread…But for the lovers….Who pay no praise or wages / Nor heed my craft or art.” A sumptuous capturing of longing by Thomas: nocturnal poet, moon-driven, hunter of the oblivious hunted lovers so sated by the warmth of one another’s arms they have no interest in poetry. Though the poem, and the force behind it, often outlives the particular lover, as Thomas no doubt knew, such wooing a waiting game.


Other equally adept interpreters of longing (besides poets): dancers. Isadora Duncan (married for two years to poet Sergei Yesenin) seized my imagination early on as a child. I no longer have the book (no doubt lost in one of the moves of childhood) but the image lingers of the scarf trawling behind Isadora, the axels around which it wrapped, the irony that the very fabric she so loved to swath and swirl about her played a hand in her death directly. But here in our home, it is Romola Nijinsky’s book Nijinsky on my shelf luring me with tiny dancer on its spine as image of mysterious lover. 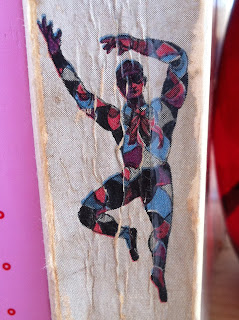 Every portion of the miniature figure’s skin is covered in blue, black, grey, and plum geometrics. At the dinner table, after I’ve tried to capture Nijinksy’s ethereal strength and prettiness with words alone (“He was ’s “God of The Dance,” etc), I show my family the five or so grainy black and white photos portioned through the yellowing pages. Because he’s generous, knows to humor my occasional dark girl poet obsessions, my husband patiently retells the story of Narcissus to my boys as they stare intently at Nijinsky. In the pose (labelled Narcisse), his arms are raised but gaze averted in a gesture of abandon, vulnerability. But his pose also conveys refusal: the downcast eyes portend the tight internal focus which leaves no room for an earthly lover.


But such focused refusal has the power to draw feral valentines, as here, where Paul Claudel so succumbs to the intensity of Nijinsky’s presence that everything takes on a certain radiance: “There was a green half-light in the dining room, and the sun of midday with the intermittent cry of cicadas reached us dulled by the mango trees, there was a green shade on the cloth between the fruit dishes and the silver service, a gleam of emerald play in the glass salad bowl among the fragments of ice” (Claudel, preface to Nijinsky, 1934, Simon and Schuster).  Claudel admitted he had no reason initially to enjoy the ballet or expect to be affected by the dancer, but we know he’s smitten by the passage above.
I close today by acknowledging one of my favorites of the girls of poetry, Sylvia Plath. On this anniversary of her passing, Brain Pickings posted, The Quicksand of Existence: Sylvia Plath on Life, Death, Hope, and Happiness, pouring us once more through highlights of The Unabridged Journals of Sylvia Plath (published back in September 2000), celebrating the whole, feral poet, with light of previously edited passages bringing Sylvia's passion and skill for hunting the moment down into focus. All is fair, as they say, in love and war: if you are going to love any girl, love all of her. Happy Belated Valentine’s Day. 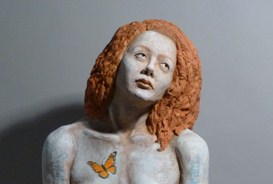 In spring of 2009, sculptor Sandy Frank and I started playing with the notion of putting poems on sculptures. I gave her a handful of poems and here's what she sculpted. Visit my website, specifically, Collaborations for Bread, to see her artwork side by side with corresponding poems: Someone (about an ethereal dream lover you might encounter between waking and sleeping), The Painter's Wife (about the opposite: a physical plane lover, in this case, a painter, a husband). We wrap for now with the sculptures for a trio of poems out in circulation: Querent, Seer, Selke...so we only showcase the sculptures for two of the poems....but...more to come.
And I want to extend the collaboration...by reversing the process, so here's my promise to Sandy...to write new poems based on her existing sculptures. We will post as we go. Further, I'd love to discover other work by poets and sculptors along similar lines; so please, in comments, add your links to work you are doing yourself or that of other artists you enjoy.
Someone originally published by Coe Review Press, 1996.
The Painter's Wife originally published by Line Break, 2009.
﻿
Posted by Tania Pryputniewicz at 1:38 PM 4 comments: