As mentioned in an earlier post, I’m looking forward to attending A Room of Her Own Foundation’s August Women’s Writing Retreat (still accepting applications here). A Room of Her Own Foundation (AROHO) offers hands on networking support to women writers--from serious grant support (check out their Gift of Freedom Award)—to sponsoring a number of writing contests and retreat offerings throughout the year.

In addition to rubbing elbows with a diverse score of writers, I will be presenting some photo poem montage work (the most recent--Nefertiti on the Astral--currently up at Prairie Wolf Press) and facilitating a small writing group titled, “The Exquisite Now with Feral Mom, Feral Writer” during which we’ll generate writing based on daily photographs, keeping the blog schedule on track, no doubt posting on the oddity of the week’s extreme quiet (shifting from our three child, one puppy, four feral cat, chainsaw wielding husband household to a room and bed of my own).

I’ve challenged myself (August bearing down) to read as many books as possible by fellow retreat attendees and have posted the first of these bite-sized reading diaries over at my She Writes blog, starting with a look at a holocaust account by Sara Tuvel Bernstein titled, The Seamstress: A Memoir of Survival (read in full here).

Posted by Tania Pryputniewicz at 9:57 AM No comments:

Hopeless Carnage: Sisu the Siberian Husky and The Song of Sedna 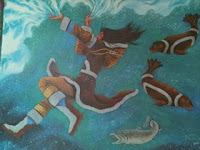 Nothing nostalgic about this week’s incoming chaos: the ten month old pure-bred Siberian Husky my husband showed up with last Saturday with near-to-no warning or crate or fenced in yard to contain our ice-eyed bundle of pull.

Four days later, I’m tailing one of those Model T cars like my husband’s grandmother used to drive (her first car—which she bought for $5 with her first paycheck as a nurse). In my state of dog-deranged anxiety—I glance at the license plate and read, “Hopeless Carnage.” I’m thinking, “Isn’t that right!!” But as we near the red light and slow, I realize it actually reads, “Horseless Carriage.” I laugh, but just a little, still struggling to weigh the advantages and disadvantages of keeping the new family member.

It all started with a casual phone conversation. “I’m going to look at this puppy…” my husband said from his San Diego apartment, which, as any wife worth her salt knows, means, “I’m coming home with this puppy…” Honestly, who ever goes to “look at a puppy” and passes on keeping it…

Three days later he’s driving the ten hours towards us with our new charge despite my 80/20 vote for waiting to bring a dog into our already stressed household. And the craziness begins, for when you cross a cat-loving poet (me) with a fitness Instructor/ Sonoma Sate University Sea Wolf Women’s Cross Country Coach husband (him), the layers of trouble start cycloning towards the marriage.

First of all, my husband informs me he’s already bought the dog a nametag. Since he named the first two of our three children and I had essentially voted against bringing this pup into our home, I wanted a shot at naming her. I’d landed on Sedna—I know, I know---it sounds like Edna—but listen to the reason behind it. I’m hopelessly image driven, so I immediately had thought of The Song of Sedna (Doubleday), a beautifully written and illustrated children’s book by the talented San Souci brothers.

Eskimo girl Sedna falls in love with a handsome stranger (Mattak) who takes Sedna (and her faithful wolf companion Setka) away from her father to start life anew on the Island of Birds. It isn’t long before Sedna discovers she’s married a non-human—a bird spirit. When Sedna’s father comes to rescue her, Mattak pursues their boat in bird form, finally transforming his boat into a fire-breathing serpent, terrorizing Sedna and her father until her father sacrifices her to the sea out of fear. With the help of seal spirit guides, she’s able to overcome obstacles and harness her power for good to earn her position as goddess of the sea. Sedna sits on her underwater throne flanked by Setka and her father (who she has forgiven).

The kids aren’t buying the name Sedna, so I try for Setka. No go.

Frankly, I’m kind of ok with their refusal—I’m not sure I want to carry the metaphor too far…I’ve never caught my husband in non-human form, though when we were first engaged to be married and I slept in the museum air of his grandparent’s living room, where the Greek urns, Polish dolls, sculpted busts of some of the family and the relics of 20 years of diplomatic travel reside, I woke from sleep to the image of Neptune, brandishing his Trident, the dark sunrays of his hair writhing like Medusa directly over my face. Though startled, I wasn’t afraid and even felt a certain calm, accepting the visit and its message: You may marry and have this man for your husband for now, but someday he will return to me, for he is of the sea.

Back to the dog’s nametag, which reads Sisu. As is so often the infuriating but charming case, my husband’s got a rock solid alibi for getting his way: the name Sisu honors his late great grandfather, a Finnish running diplomat. Sisu in Finnish means “fortitude, tenacity, stick-to-it-iveness.” Sensing a divided front, the kids gang up on me and take a perverse delight in calling the dog Sisu as many times as possible in front of me while I counter with, "Her name is Sedna!" though she answers to neither Sisu nor Sedna as her former name was Dakota.

We survive the first night crateless, though I’m not liking the sight of this dog sprawled across our bed. She rotates between beds, resurfaces from our downstairs with a toothbrush, a bouncy ball she’s pocked, a foam pad she nips apart. The kids think I’m cruel the next night when we put her in the crate, but after so many years of rotating beds with children in a sort of sloppy free-for-all, I’m not willing to carry that dysfunctional pattern any further, especially not on behalf of a dog.

When we first come home from Petco with a lovely cream and black canvas crate, our five year old son clambers in with the remains of his father’s childhood tiny plastic green soldiers and leggos in tow; I hear my husband cajoling him out of the crate: “That belongs to Sisu, not you.” I overhear our two older children remarking they know how it feels to be displaced….and shortly my husband’s out on the deck telling them he’s the king of displacement... “I lost all Momma’s love and attention to you three for years…”

And I flash on a drawing my father’s wife shared with me (drawn by her father, Paul Beattie, of her mother. There were five children in her family). When I look at the drawing, I slip straight out of “mother self” and into her father’s point of view: there sits his wife, her eyes averted, gaze perpetually trained a little past his face and over to the kids. See how just over her third eye, he’s penciled in a tiny sketch of her face and upper torso. To see her, he first has to see through the body of swaddled infant.

So maybe Sisu has a third function aside from 1) family dog and 2) SSU mascot: lover of my husband.

Sisu should more aptly be named Houdini after the test of the first Monday of the week when I was faced with a full day of errands. Overriding my husband’s suggestion of putting Sisu out on our back deck (where I envisioned her using the picnic tables as a springboard to chase the deer, random rabbit or feral cat sure to cross our hill at some point during the day), I lead her into one of those collapsible metal crates inside the house. Piece of cake, I say to myself, lock up the house, and take the kids to school.

Three hours later, when I return home, Sisu greets me at the door with a wagging tail, a circle of shredded cardboard at her feet, a ball of yarn twined around the stairs, a bag of Easter chocolate foils scattered in the upstairs bedroom, a little offering of dog poop on my daughter’s comforter and sweater. All sides of Sisu’s metal crate remain securely shut—I check it again and again. There’s a little tuft of Husky hair near the bottom where the plastic under-tray has about an inch of clearance to slide out. My only clue. That evening, she chews through one corner of her canvas crate as well, destroying the zipper and her chances of sleeping in my daughter’s room.

To the sound of her yips and howls protesting her return to the metal crate downstairs for bedtime, I try to focus on her potential strengths: guard dog extraordinaire for the days my husband’s out of town. But when I take her out at midnight under the stars to pee, the posse of critters snacking in our compost bin at the far end of the yard (just out of sight behind the fence) scatter. She hurls her body back towards the porch, tail tucked snugly between her legs.

Hands down, she loves us up. And she collapses on my feet in a furry swath, follows my every move with her pale-blue eyes. And she’s a sheer muscle and furred torpedo of joy at the ocean circling the kids and the waves…But…

…alas, Sisu is on probation with me.

Then again, maybe I’ll have to shoulder some of the responsibility for her sudden appearance in our lives, for as I’m drifting off to sleep, out of the corner of my eye, I see the “image map” (made in the spirit of play around the subject of furthering my goals as a writer at the beginning of the year). Up near the top of the map, right next to several gold rimmed butterflies and a Cicely Mary Barker Flower Fairy sit a pair of grinning wolf pups propped against one another, muzzles open to catch the falling snow.

Image of Sedna is from The Song of Sedna, written by Robert D. San Souci and illustrated by Daniel San Souci.