Boats of Mercy and the Gift of Journaling

So when a wave recedes, and you’re standing there with your ankles moored, it’s best to close your eyes against vertigo…or risk losing your balance, confusing your body’s point of anchorage and giving in to the headlong return to the sea.

That’s how it has felt this month to write against the rest of my life and its responsibilities.

Over hazelnut decaf mocha, I discussed happiness with two of my favorite mom writer/artists. (See Jessica Powers' recent review (Can women be smart, empowered, AND happy? ) of Ariel Gore’s latest book, Bluebird: women and the psychology of happiness, on this very subject). Are we to only be fulfilled by our children? On the other hand, I asked my friends, “Will our kids think we are narcissists for pursuing our writing?” We each hoped not, because the few hours away are worth the recharge (the ability to return to our families having tended to ourselves). We each hoped we could deepen our artistic/writerly endeavors, while mothering our children with love and poise. Is it possible? To do both well? That’s what I’m after; it isn’t easy.

The retreating wave feeling descended this month for a number of reasons:

1) the holidays—though we had harmony at our Thanksgiving table and did not, after all, as was suggested in this week's NY Times article (Food, Kin and Tension at Thanksgiving), resort to playing “cruel comment” Bingo, which you win by running into another room to dial a friend with news you’ve heard a row’s worth of wretched, time-worn remarks from family members. I love my family and love time with them; fitting everyone in becomes the mind-scramble, on top of the pandemonium of the kids loose from school and schedule.

2) changes in my husband’s schedule for the coming year

3) my tiny laptop (seven years old) finally crashing (was it the frayed, duct-taped power cord? No, said the employees at Radio shack, in their loyal, customer-ethical way, both talking me out of buying their $100 power cord. “Try moving everything using a flash disk”, they suggested sagely. Tilting the greenish line-warped laptop screen just so once the kids and the husband were safely snoring, I salvaged my files).

4) loss of a writer friend (see last post)—lovely Barbara Robinette Moss, 54, artist, writer, in full bloom with her work. Over the last ten years, while she bravely battled her illness, she furthered her work and her skills, and had the time to look at whatever essay or poem I mailed off to her. Every time I talked to her she had a new conquest: “just finished a screenwriting course in New York,” “took an acting class,” “just opened an art-gallery with my Duane,” “will be teaching in Taos this summer.”

Inspired by Barbara’s daring, I am starting a new project for the New Year—poetry recordings with music. As soon as I learn how to get the right widget on the blog, how to get the microphone to talk to my computer, transform the wave file to mp3 etc, I will be posting these new collaborations—poetry set to piano music with my father Steve. We are looking at the Egypt series—debut poem, “Nefertiti Among Us.” It isn’t that I’m giving up on the world of print or on-line journal submissions (though these poems have been passed on three times so far) it is just that I don’t want to wait to play any longer.

I have kept a journal since I was five, and when life gets hectic, that is often the only connection I have to my writing. When I am feeling tired, when that retreating wave feeling comes and I fear I will never finish writing the words I am meant to write in this lifetime, I tend to feel journal writing is not enough. But I’m coming to see one’s writing truly is a mosaic, and it doesn’t matter if you write words down on a candy wrapper, in a journal, as a prelude to a poem, call it what you will, you do not know where it might end up years from now when you finally figure out where it belongs. Francine du Plessix Gray speaks to this in her essay “Black Mountain: The Breaking (Making) of a Writer” from the Collection Adam, Eve, and the City.

du Plessix Gray writes: “by 1926 I had two children. I lived in deep country and in relative solitude, encompassed by domestic duties. The journal was becoming increasingly voluminous, angry, introspective. The nomadic tomboy, finally denied flight and forced to turn inward, was beginning to explode. One winter day, I felt an immense void, great powerlessness, the deepest loneliness I’d ever known. I wept for some hours, took out a notebook…(p. 331).” She goes on to describe how the re-workings of those writings became the first chapter of Lovers and Tyrants, and how her mentor Charles Oslon had encouraged her to faithfully keep a journal. I can relate to the intense feeling of isolation and motherhood she describes, as well as the power of steady journaling. Inevitably you reach the core, your potential.
Posted by Tania Pryputniewicz at 4:46 PM 2 comments:

Just back from a remembrance celebration for artist and writer Barbara Robinette Moss, (Change Me Into Zeus’s Daughter, Fierce—for excerpts see: http://www.barbaramoss.com/ or an earlier post) recovering from the collision of aloneness and togetherness that occurs when you fly across the country for love of someone no longer incarnate to be in a room full of grieving strangers. By night’s end, familiars, via the common, palpable, bond of love for our late friend as expressed by speaker after speaker (furthering Barbara’s presence in our midst) in Kansas City.

Planes leave. On time. As did mine, without pity, as my husband and I encountered malfunctioned gas pumps on the freeway (20 minute lockdown) and the 5 a.m. mistaken merge onto the Bay Bridge heading away from the airport, with maniacal hairpin u-turn at the bottom of Treasure Island costing us another 20 minutes.

Once I got over the shock of missing my plane (how could I plan so carefully for the kids but fail to plan for my own departure--pages of notes re: pickup, drop off, carpool, carpool mom phone numbers, Aikido outfits packed, play-dates listed, dinner menus, backup helpers, backup backup helpers, etc), I used the 9 extra hours at the Oakland airport to put a dent in The Afterlife Experiments: Breakthrough Scientific Evidence of Life After Death by Gary E. Scwartz, Ph.D (with William L. Simon). A friend had hooked me on one of the book’s central images: that of the heartbeat, with its own unique sound-print, radiating out and out into space long after our physical incarnation has ended (maybe for eternity, is the theory).

“Is it possible,” the authors ask, “that cardiac energy provides a loving bond that not only exists in the physical realm but continues as info-energy after physical life has ceased?” p. 22. They started “with the hypothesis, the working assumption, that science can establish that love exists, that consciousness exists, and that survival of consciousness exists, in the same way that science has established that gravity exists, that electrons exist, that photons from ‘deceased’ stars continue to exist” (p. 11). I’m a believer, so such reading preaches to the choir, but for skeptics out there, check it out.

Hours later, with an afterlife hangover, overdosed on airport food and bad coffee, I found myself on the last leg of my flight to Iowa City. Incapable of finding the silver lining in my botched departure. Until my cab driver began to talk. About how he was really a singer in a duo. It was all coming back to me—the nature of Iowa City and its inhabitants: if you’ve ever lived in Iowa City any length of time, you discover everyone from your mail carrier to your street-sweeper has a manuscript. Hidden somewhere. So far this cab driver had admitted he was really a singer and a musician. But then he adds, “I’m glad to drive you, I was hoping I’d get an English major, actually. You know, I write a bit too.”

I perked up. Then: “My town--North Liberty—has a great library. Just got done reading a real good book by this lady…I’m sure you don’t know her…but we invited her to come and give a reading from her book, Zeus’s Daughter. Barbara Robinette Moss? Ever heard of her? I was hoping to take a class from her some time.” I put one hand on my heart and the other on his arm. “Stop it,” I said, “she’s the reason I’m here.” Far more eloquent stories about Barbara’s continuing presence and her effect on everyone she knew circulated at her remembrance, but I felt blessed by this tiny synchronicity.

It turns out perfect planning didn’t have much to do with catching planes on time, for three days later I found myself once again in the 5:30 a.m. dark, panicking, just off Highway 218, staring by the glow of my i-phone at the muffler of my friend’s car at our feet. Bless Google, and yellow taxi. Though last to board, I managed to catch my flight to Kansas City.

In anticipation of further trouble, I padded an extra hour for my return trip to the airport to fly home to Oakland. The hour came in handy: the friend (Tom--innocent! no ticket!!) driving me to the airport not only got pulled over by the cops, but took 4 wrong turns merging onto the freeway and needed an extra half hour to find a gas station.

But I’d do it all over again—for the magical, synchronous hours I had with friends in Iowa City—sleeping in Mary’s tiny Midwest garret, the cold, crisp air, the cherub angel and Escher print above the green armchair. The blue-black crosshatched pattern of the branches on the barren tree outside the window. For breakfast quiche with Bonnie, doves cooing in the background. For reconnecting with my poet friends Tonja (http://www.papagenopoetry.com) and Laurie, my dancing friend Renee, other friends of heart Ann and Carol and Jeff. For the realization that the writer self I nurtured in Iowa City still thrives and remains as deeply important to me as the mother self I’ve reigned from internally for the last ten years.

And last, for the friends and family of Barbara I came to meet, and stories I heard about Barbara—whose heartprint I can sense, believe, is radiating out and out into the Milky Way.


An article about the gallery Barbara and husband Duane opened together: http://presentmagazine.com/full_content.php?article_id=1600&full=yes&pbr=1
Posted by Tania Pryputniewicz at 5:40 PM 6 comments:

"Engorged" up at Literary Mama 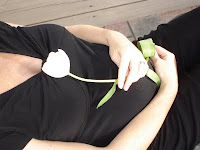 I had to add this pregnancy photograph (taken by Robyn Beattie) to balance out the feral poem Engorged up at Literary Mama this week; the poem was written on behalf of anyone who has ever been there...and for those husbands, partners, and family members coaxing new or seasoned moms through the pain of such nursing. For me, it was the third child that brought on the condition, a shocker, after thinking I was a pro. Thank God for that British nurse: bless you, where-ever you are.


and once again, Robyn's portfolio can be viewed at www.robynbeattie.com