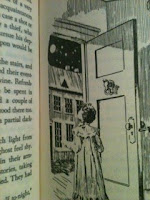 The house quiets. The children sleep, their anchors lifting out of me one by one. And my naked self, neither mother nor wife nor friend, floats downstairs for a cup of tea, the open space between the wooden slats of the stairs tainted gold by tree-light and the lit lamps of the xmas village resting in eternal snow.

Too thirsty to sleep, too tired to write in the journal; the steam jet from kettle’s end curls the kids’ drawings on the side of the fridge. The fire needs a log. The rain-wet deck beneath my bare feet, night’s frigid blue-black backwood’s dark tangible as an entity, and Emma, the outcast feral cat, perched on the railing. She flees. The other three ferals, though tolerant of her presence at feeding time, fight her out of the cat-bed under the house.

Mug’s heat singing knuckles, I’ll linger at the top of the stairs, standing, reading, in front of the bookshelf next to the bedroom that’s long needed a velvet chair and lamp to call its own. Johanna Spyri’s Heidi falls open to chapter 12, The Sesemman House is Haunted, in which Heidi’s sleepwalking earns her an interview with the good doctor, who asks, “…just tell me where you were going.” 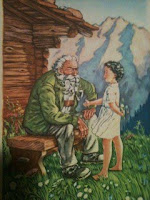 To which she replies, “‘…every night I dream the same thing. I think I am with my grandfather, and I hear the wind in the pines, and the stars are shining in the sky. And I jump up quick, and open the door of the hut, and oh, it is so beautiful! But when I awake, I am always in Frankfort,’ And Heidi began to sob, and fight with the trouble that swelled her little throat almost to bursting (p. 162).”

I’m transported into the fierceness of Heidi’s longing for the taste of goat milk, the round window through which the moonlight of the Alps slips down over her sleeping face and the gruff peace she finds in her grandfather’s care. And recognize immediately this image of a self that might travel outside of itself at night in pursuit of what one’s day self might ignore or need to set aside.

Molly Peacock, in her dew drop of an essay on the allure of flowers, State of Grace, writes, “‘I had two selves, really: a robot self to dispense my obligations, and a true self that was dangerously buried or, as gardeners say, “caught in the bulb.” But in that garden, where I was able to act dreamy, my true self was released’” (p. 134). This image appeals equally: the state of resting, dormant, lingering before the inevitable ascension sunwards.

I’m careful, though, to love my current placement in incarnation and in time, thriving under the maelstrom of raising children and negotiating marriage, taking as a self-stated mentor Pattiann Rogers, who writes in her essay, Degree and Circumstance, “If, through caring for my children, I lost writing time, I gained by the expansion of vision and insight and compassion my experiences with them gave me…The writing I was able to do in those years is suffused with the energy my children radiated” (p. 161).

My preoccupation with the fracturing of the self comes after a return to teaching after ten years of raising my children at home; one side-effect: an armful of books from the school library including an anthology titled, Women on War, stumbled upon while in the stacks on my way to some other volume (as is often the case).

In a post-grading brain-fog, I’d opened Women on War to Isabelle Allende’s excerpt from House of Spirits: The Hour of Truth with its brutal depiction of a detained woman’s torture. I opened The Sweet Breathing of Plants to a similarly intense passage titled, Fate of the Wise Women by Jeanne Achterberg; the paragraph my eye fell on gave a graphic description of the ways a woman accused of witchcraft might be terminated in Germany in 1629 (involving ladders, alcohol, matches, ropes, hoistings, weights, and hour long intervals of waiting to for the torture to repeat if the accused lived through the first round). There’s a holographic quality to such reading experiences for me, the words goading a cellular memory of the layers of horror women have survived.

I’m aware that men have suffered their atrocities over the centuries too. But, given this lifetime’s gender, I’m thinking of all of this in the context of what Eckhart Tolle describes as “the female pain-body,” (The New Earth) which, named, acknowledged, has a chance to heal. It’ll take women and men--and who knows how many years--to fathom and heal such outrageous trespasses, such devastating twists of the human psyche’s past.

The careful words of the writers who have picked their way through the carnage and made a map of their understanding, as well as a map of what eluded them, places me at the very beginning of the labyrinth (ever-shifting as it is, concentric, multi-dimensional). I’m indebted to every writer I’ve discussed here, as well as many others, for the threshold I have the means to cross—if I can just get both the sleep-walker and the day-walker inside to arrive simultaneously.

Photo of Heidi and the moon, Heidi and her grandfather appear in Heidi by Johanna Spyri, translated by Louise Brooks, Illustrated by Roberta Macdonald, Children’s Classics Edition

The House of Spirits: The Hour of Truth by Isabelle Allende appears in Women on War: An International Anthology of Writings from Antiquity to the Present, edited by Daniela Gioseffi

Degree and Circumstance by Pattiann Rogers appears in Where We Stand: Women Poets on Literary Tradition, Edited by Sharon Bryan

The State of Grace by Molly Peacock and Fate of the Wise Women by Jeanne Achterberg appear in The Sweet Breathing of Plants: Women Writing on the Green World, an anthology edited by Linda Hogan and Brenda Peterson
Posted by Tania Pryputniewicz at 10:16 AM 6 comments:

5 Things I Learned About Writing in 2010 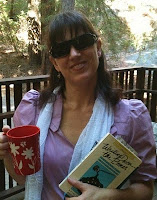 I pledge to return with renewed vigor in January 2011! I bow down, for now, before the altar of teaching (I returned this fall semester to teaching after a ten year hiatus from the formal classroom). I did manage to post, in response to She Writes co-founder Deborah Siegel’s prompt “5 Things I Learned About Writing in 2010,” to my She Writes blog.

Motherhood, Matrices, and Accountability can be read here: