Please celebrate with Robyn Beattie and I by stopping by to view the 5 poems and 5 photographs in honor of the late artist, writer, sculptress Ananda Beattie:

Guest Poetry Editor Nicelle Davis at Connotation Press was kind enough to also interview Robyn and I regarding our artistic process of collaborating on poems and photography.
Posted by Tania Pryputniewicz at 10:29 PM No comments:

The Tenth Stair and the Making of “Amelia” 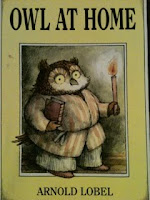 Lately, I’m Owl in Arnold Lobel’s children’s story “Upstairs and Downstairs” from the collection, Owl at Home, in which Owl spends the evening rushing from his downstairs to his upstairs, calling, whenever he arrives in either location, “Owl, are you there?!” only to rush madly to the opposite spot to ask the same question of himself in the new spot. He never answers (how can he?) and finally, in exhaustion, sits on the middle stair, where he can best survey both destinations

The Tenth stair is not a bad location, and who wouldn’t want to live in any one of Lobel’s settings (given the sloping ceilings of Frog and Toad’s worlds, the moonlit path extending before solitary Grasshopper, the armchair and hot bowl of soup waiting—once Weasel’s outsmarted—for Mouse, arched neck of lamp with blossom shade warming head and book).

While the tenth stair’s a good metaphor for our psychic position, I have little desire to write about our family’s two-city dilemma nor the siphon of creative energy resulting from missed airplanes, trips to the ER, work obligations, the overlay of possible new grids and patterns to forge in a new city while still driving the old--you know, the human minutae song of what needs to be done, done better, now, while slicing cucumbers for lunches, peeling bandaids for skinned foreheads and vacuuming bobby pins up in the wake of the Sunbeam Fairy on her way to weekend Nutcracker practice. 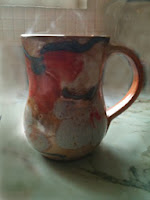 I sequestered a day, though, to sit beside Robyn, my accomplice, so we could preview her images for the making of three new photo-poem montages.

And mercifully, within moments of sitting beside her with my double-bergamot Earl (tea housed in a substantial globe-bottomed Barbara Hoffman muted orange and grey gold petalled mug), I’m “home”—at peace, and the images for the poem “Amelia” take an order in my mind: here, opalescent mounds of buried pearls in an abalone shell will echo a line of cream buttons down the waist of a crepe dress will echo the silver rivets of an airplane’s wing.

Since the poem names its own set of images, it’s tricky which photos to choose…not overstate, not understate or compete with the words. What furthers the dream? Like here, these milk tendrils of brushed wool, so like incense rings, barely present enough to touch. 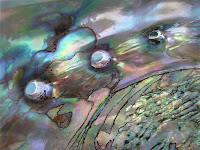 Because the poem isn’t about flying, or lovers, directly. But transport past thresholds alone. “And god approving” before the sun breaks through that sliver of sky-time, pre-dawn (finite! mercurial!) when hearing the sound of your own breath is enough.

Link to our first photo montage:
at the Mom Egg.