is live over at The Fertile Source this week. Lydia spoke with passion about her years of volunteer work at CPI on behalf of women, children, and their families in Sonoma County, California. It was a joy to hear how boldly Lydia was willing to speak up, and as a result, found herself invited to be a board member at CPI where she helped make immediate changes (for example, offering night classes for working families).

CPI is hosting a number of free events in honor of Child Abuse Prevention Awareness Month (April) such as The Toolbox Class (presenting "twelve 'tools' that help families develop a common langue to build self-esteem and resolve conflicts and develop empathy for others," Grandparents Parenting Again Luncheon, and Assets and Resources (in which "parents will learn how to evaluate their family's situation, create budgets, pay bills, and address emotional stress while meeting crucial family needs"). For more information, check out the interview or contact CPI directly at: http://www.calparents.org/ , 585-6108.
Posted by Tania Pryputniewicz at 11:21 PM No comments: 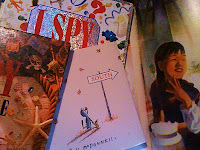 So the noise coming from the back tire I noticed two days ago while coming home from a teeth cleaning failed to disappear. As I drove around town hoping it would, the gruff mechanic guy voice in my head just got louder: noises usually mean trouble and the sooner you bring it in the better. I emailed my husband for permission to take the van in (a ploy to buy me another driving day), and followed his advice to go down to actually look at the tire (conveniently forgot I was qualified to look). Sure enough sitting in the middle of the treads: a bolt, its ½ inch diameter octagonal head flush with the tire’s surface. My husband phones to make sure I looked at it, and closes with, “Whatever you do, don’t let them tell you we need a new set of tires…”

While I contemplated if I could take the kids to school first and go by the gym (where I’d just renewed my membership) to work out and drop off my youngest to meet his little friend in Junior Club before taking the van into the shop, my daughter came downstairs complaining of a sore throat, while explaining she’d still need to go to ballet in the afternoon even if she missed school. I talked her into “trying” and loaded her into the van…but after circling the play yard three times, I moved on to drop off of the middle son. The day began its serious disintegration now, when, realizing that my daughter’s condition would keep us from attending junior club, my youngest began to howl. Followed by his brother, who realized his after school playdate was being jeapordized now that the ballet carpool was on its way out the window.

I speed-dialed junior club, apologizing for canceling already our first attempt back to the club in two years and we hit the shop. With daughter and the littlest in tow, I headed for Coffee Catz for some hot chocolate therapy and a game of crazy chess with my son. I suspect he could play correctly—given that he can set up the board without help. It drives my husband nuts—he’d prefer I make my son move his horse two up, one over. But my take is what will he remember, looking back on this time in his life: how we forced him to play by the rules, or the warm cocoa and the oil painting here at Coffee Catz of an owl grasping a harp in its talons, the cat playing the violin, how easy it was to win?

“Look Mom, the queen can fly...” he coos, and there she goes, right over his bank of pawns, mine, stiff and black, straight to my king. One move, game over. Why not. past

Two hours later, the shop guy calls as I’m unloading my son out of the bathroom stall at the library. The flush of the toilet coincides with something about needing a new set of tires. “Can you just give me the bottom line?” I say, apologizing about the flush, telling him its not mine, but the kids. He’s unphased and says smoothly, “About $604 out the door.” Over shrieks of, “Are we still checking out I Spy?” I text my husband where he’s ice camping. The only reason he doesn’t fly off the handle when I ask for $600 is that he’s just learned his trip will be cut short; someone in his group got a DUI the night before.

I call the shop and agree to wait an additional hour for tire installation, the kids up to their elbows in the library fountain. We find three new I Spy’s, the beautiful water colors of My House Has Stars, and a darling no-word story called South about a little bird who gets left behind at migration time. Befriended by a cat who walks him through the city and over hill and dale, our little bird quells his weeping once they find his flock. “Again! Read it again Mom,” says my son, and settles into the crook of my arm as we sit on the floor beside the shelves of authors ending in M, his wet sleeves soaking into mine.

In the afternoon, we’re able to talk the playdate Mom into retrieving her son the half hour drive to our house. Exercise for me comes in the form of chasing the youngest along the trail as he attempts to track down the boys (who have taken off with a backpack full of hammers and hard-boiled eggs to make a fort). My little guy gives up at length. We can both hear the rustling of the brush where the boys are hiding, but he’s busy now rolling over logs in search of worms and bugs. He even lets me catch up to him, holding his palm out for me to see the rind of a translucent brown newt. Down in the driveway, I can spot the roof of our van, below which sit our spanking brand-new, bolt-free tires, which I’ll test on my way to tomorrow’s beautiful disintegration and god-willing, practical detours.
Posted by Tania Pryputniewicz at 1:31 PM 6 comments:

Ten minutes gluing last year’s calendar image of—I believe--Marinot’s “girl reading in a garden” (the deliciously plump lass in dark teal skirt, lost to the book in her lap, wearing on her head a pale green garland, a gold tipped sleeve snug on the wrist she’s leaned against her cheek)…to the folder I’ve chosen to house the two poems I’ll be reading during the open mic portion at Skyline College’s Women on Writing conference tomorrow.

I’m in my cabin, having spent at least an hour looking for last year’s driving directions to WOW, which by now, even on our slow modem, I could have googled, downloaded, and printed, or…just left to my writing accomplice for tomorrow’s adventure, the lovely Liz Brennan, instead of sorting through the stacks of manila folders and the rollout shelf under my desk with its drawings by the kids, business card for Scene Clean (advertising clean up of homicide, death, filth, hoarding someone randomly handed me at a party), back issues of The London Review, a sweating mini candy-cane still in its wrapper, and a volume of Immortal Poems of the English Language that still smells like the Illinois farmhouse bookshelf it occupied when I was 8.

Can’t help cracking Immortal Poems; I’m right back in time, peering at those faint oval black and white photos and bad artist renderings of Shakespeare, Milton, Keats, Yeats and Hopkins, mistaking Dryden and Shelley for women and E. B. Browning for a man, searching for the women. Phew, they exist…. Christina Rosetti, Elizabeth Barrett Browning, Edna St. Vincent Millay, Elinor Wylie and Emily D—5 out of 56. Such math didn’t occur to me as a kid, but I do remember peering pretty intently at each of those women’s faces. I see that someone has scratched out the Smart under Christopher Smart, and penned in Dumbie, but honest…it isn’t my writing. My grandmother? Little brother? One of the ex’s?

Chalk up another half hour to re-reading poems…how can I not: Because I could not stop for Death, Ode to a Knightingale, Fern Hill, Moore’s Poetry, Dover Beach. Which does nothing for my confidence choosing worthy poems of my own to read aloud, but I think, if, before getting to the blank page on my desk for today’s raw writing, I sneak up to the main house for a warm-up on my cup of coffee, where I will likely encounter my three year old and possibly my husband who by now would like the computer back, I think I’ll be able to muster the day’s work…and possibly the wherewithal to call Scene Clean to tackle my desk so I have somewhere to plunk my elbows.
Posted by Tania Pryputniewicz at 4:36 PM No comments: