Some Mother: Abalone vs. Coffee 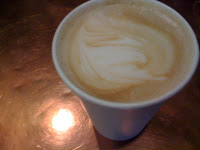 Saturday morning…and I’ve believed my husband’s line that some other diver plans to meet him to brave the 19-plus swell he’s bent on surviving in order to nab three abalone. Despite a raging desire to meet a friend alone for coffee during this rare window when my husband’s home and thus can cover our brood for me, my mother’s intuition perks up when he says casually, “Of course I’m still diving and I’m sure some mother will watch the kids on shore.” 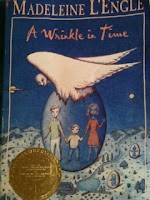 Food bag over my shoulder and Madeleine L’Engle’s A Wrinkle in Time on hand (one last chapter to reread before the afternoon’s mother daughter book club we’re hosting), I scramble down the 100 feet of steep cliff to the rind of sand we’ll park on for the dive’s duration, noting the healthily frothing feeder stream, wide with the recent rains, and the ocean’s jangle of white capped waves.

Weight belt cinched and mask in place over his eyes, my husband fin-walks backwards into the ocean while waving adios to me. I’m scampering to cross the log straddling the feeder stream because the three children, including the 5 year old, have since rock-hopped the 5 yards across the water and disappeared into the brush. Do I stay and watch my husband kick out so I can count seconds as he disappears into the choppy sea? Perch on the log and crack my book? Follow the children?

As the wind pushes at me and I struggle for balance, several seconds of raw pleasure wash over me at the visceral three-way-pull--this metaphor taking over my body as it poises--waiting for my brain to prioritize and decide which way to go since I can’t split into three, like the fractures Mrs. Which, Whatsit and Who make as a composite mentor/mother for Meg in Wrinkle.

I wave merrily to my man and settle on reading a paragraph, right there, standing on the log. Meg’s abandoning her plea to IT for Charles Wallace, finally hitting on the most effective of ploys: to flood Charles Wallace himself with all of the ferocity of her love. Even now, in middle age, I still identify squarely (as I did when I first read the book as a pre teen) with awkward, angry, doubting Meg. Wanting, like her, to open the vault inside where the power rests, the good kind.

A paragraph of time’s all I can take away from the kids, so I glance to where my husband last vanished…note the slick canary yellow of his board floating without body, wait until I see the hooded nub of his head appear and fling my voice to the shrubs where the kids fled…”Come back and play where I can see you…”

…which ends all the fun…and here they straggle back, the middle son with a new 3 incher of blood gushing down the shin, my daughter scowling at me with all the teenaged angst her 10 year old self can muster, the 5 year old taking so long to appear I fear the worst. Ah, he’s merely soaking wet, shoes dripping, his icy hands clamping my neck. I hold out the food bag; they drop in unison to the sand and eat in sulky silence--a week’s worth of lunchbox rejects: baggies of cut apples, dried cranberries, an orange, two freckling bananas. 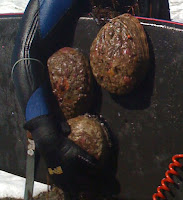 Ten minutes later my husband emerges from the sea, three maroon-grey helmets of abalone suctioned to his board. But before I can reach him, he returns to the surf zone for a missing fin, ill-timed even for a veteran lifeguard, for he gets sucked under and tumbled for a healthy number of seconds. After eleven years of marriage, I don’t even waste the adrenaline on the trail-plus-flagging-down-rescue vehicle-math.

None the less, a tiny thread of worry wreathes its way towards my heart. Eventually I spot an arm, one leg, in the beery green curve of a descending wave, then the rest of him slides up on to the beach in a rush of foam, the missing fin clutched in one triumphant fist for our sons to witness. Then, on the road, our van dipping to the wind rush of traffic zipping past, he’s stripping off the wetsuit, flanked by former swimmers-turned-lifeguard friends, and one of the cops he knows, who all stop to chat while the kids holler, “Dad, Dad, we’re cold, let’s go!!!!”

Should I have given up the coffee date? Would some mother have miraculously appeared to care for my children? Should I just demand of my husband, like I demand of the kids, “come back and play where I can see you?” Flood him with love and hope he’ll walk away from danger and return home to me?

No, no, no, and to the last, yes, for a lifetime. That’s the verdict today. There’s nothing like abalone, sliced a ¼ inch thick and pummeled to draping consistency…fried with melting butter and crushed garlic in an open skillet on the outdoor wood-burning stove under the stars...

Further fun: A Wrinkle in Time, the movie, 2003; the version we rented also had a wonderful interview with Madeleine L'Engle in which she talked about the struggle she had publishing the manuscript, given that publishers at the time weren't so interested in strong girl hero types. She also let on that she wrote A Wrinkle in Time in five minute spurts "a few lines at a time" while her youngest was in diapers and she found herself happily balancing raising her children while writing.

Posted by Tania Pryputniewicz at 1:11 PM

So many things to comment about this...I have never heard of Abalone before today...I LOVE A Wrinkle in Time...and I so understand your fractured self. I too have three children who pull successfully their own directions, my husband has his own issues, and then there are the things that would be mine, were I not already pulled apart by everyone else. I will be back to this blog!

Thanks Meagan, and that's a great way to put it--the kids "pull successfully their own directions"--I guess overall I want to get better at doing that without eclipsing safety, etc. It should, then, get easier as they get older...but I suspect it doesn't hurt to get some habits in place that have to do with valuing my work. Thanks for stopping by.

Remind me again why I don't see you more often? I hate reading on the computer but love your posts.

looking forward to reading your book...and Lydia's review of it; maybe I'll see you over there one of these afternoons? Would enjoy that very much.

Tania, what's a mother to do but cancel a coffee date when there's no absoulute certainty that the children will be supervised? It's not till they're grown and we're on our way to middle age that we realize how many sacrifices we make for them. However, the good news is it's all worth it. Both my children are adults now and every time I look at them, I know I wouldn't have done anything differently. Furthermore, when you add cooked abalone the way you describe, I think the loss is worth it! :)

thanks for the reassurance...I'm glad to hear it is worth it...most of the time I sense that...but I'm glad to hear from someone who has seen more of the trajectory than I have so far. What I didn't say in the entry was that the coffee date was to visit a shop where my friend and I had our poety/artwork has just been put on display, but again...when the kids are in the balance, one has to put the secret life aside.