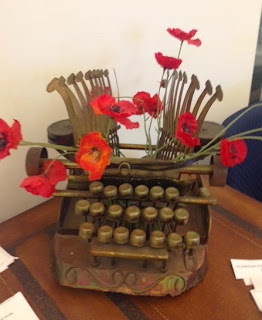 As part of San Diego Writers, Ink, “Fall for Writing” Weekend Conference, I’ll be teaching Beginning Blogging on Saturday, September 12, 2015 from 11 am to 12:45. Today is the last day to take advantage of 10 sessions for $120 member/$140 non-member or purchase each session for $20 member/$25 non-member if you do it before the deadline on Thursday (today).

Classes offered over the weekend include:

Here is the course description for my Saturday workshop:

Blogging 101: It seems everyone has a blog nowadays. It is a prime way for people to share their ideas. And whether you simply want to write a blog or use it to promote your new book, you need to plan how to do it. More than half the blogs that are started are abandoned within a year. Don’t be a statistic. This intro class will help walk you through the steps of launching a blog and keeping it for the long haul. Social media and promotion will also be touched upon.

I also invite any of my former students to come and write with us—I’ll be passing out my usual worksheets but I’ll have some new ones for you. We will write from new prompts in the hat! As you know, the hat always comes to class!

Here is the link for more information and to register for the Fall for Writing Conference. 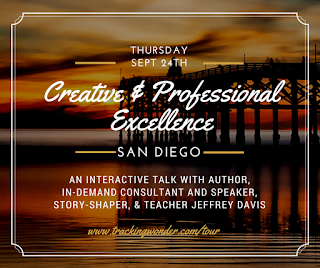 Creative and Professional Excellence: A Radical Reframe with Jeffrey Davis

Also coming up in late September, Jeffrey Davis of ArtMark will be coming to give an interactive talk as part of the Tracking Wonder Tour on Thursday, September 24 from 6:30-9:30 p.m. at San Diego Writers, Ink at Liberty Station. You may reacall I blogged for a bit as part of an amazing pack of creatives Jeffrey had assembled for us last December. I am so thrilled to have a chance to meet him in person and to hear him speak; he’s changed the way I think about the possibilities for transforming my relationship to my own business artistry. Here’s a link to more information regarding the Tracking Wonder San Diego Tour evening, Creative and Professional Excellence: A Radical Reframe on eventbrite; cost to register for the evening is $20.


For a more personal look at the kind of work Jeffrey inspires, here are links to the posts I wrote as part of Quest 2015; you'll find links to other creatives I met and have come to love at the bottom of these posts:

Blogging and the Shadow Self

Phoenix Eggs in the House of My Father

A Pilgrim Path and Mentor Dolls

A Nightmare, A Sky Boat and Serendipity

A Phoenix Seahorse and a Heart Door

Shadow Bags and Joan Swift's Dark Path of Our Names.

I’ve had a beautiful year of deepening my relationship to the Tarot alongside my students. My upcoming Tarot/writing course starts on September 21, 2015 and covers the last four Major Arcana cards from the Moon to the Universe. No prior experience with the Tarot necessary; all level of writer welcome. Do join us! Full course description here at Story Circle Network; or you can access the course description here on my website along with links to writing I’ve posted before in relation to the Tarot.

I have more to say about August’s trip to Ghost Ranch; I’m always grateful for the two-year gap between A Room of Her Own Foundation Retreats. It takes that long and longer to reap the harvest. Here’s a post about the retreat and how Maxine Hong Kingston’s book, The Woman Warrior: Memoirs of a Girlhood Among Ghosts, inspired a writing exercise about the Secrets between Mothers and Daughters. I hope you’ll feel inspired to write in response to the exercise; we are also looking for guestposts generated by the exercise at Mother Writer Mentor.

Tarot for Two: July and August Cards of the Month

Mary and I continue to co-blog at Tarot for Two. July brought us the Chariot and the Prince of Swords respectively.

Mary on the Chariot:

…I’m very happy in general that my card of the month was the Chariot—it’s saying something good, is pretty much all I’ve managed to take from it in my thinking so far.  Which is often the main thing I look for when I pull a card—is it a good card, or is it a bad card or a boring doesn’t-say-much-of-anything-good-or-bad card?...

Tania on the Prince of Swords:

…We don’t see the rider’s eyes, but the horse’s are blue, wide open. His muzzle and profile line meld into front hoove line. Four propellers, transparent as dragonfly wings, spin on top of the knight’s helmet and are labeled North, South, East, and West. Where is this duo headed with such purposeful haste?

Read the Rest of The Chariot and the Knight of Swords. 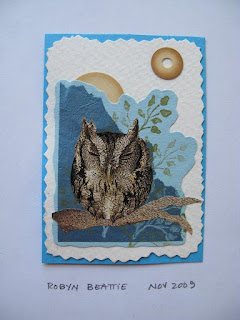 August’s card of the month: The Death Card. Period. For both of us:

Tania on the Death Card:

…So Mary and I both pulled the Death card in August as our card of the month. That’s never happened—pulling the same exact card--in the three years we’ve been on this project. And wouldn’t you know, it’s the juggernaut of cards, the King of Kings, the Arcanum Alejandro Jodoroswky and Marianne Costa in The Way of Tarot: The Spiritual Teacher in the Cards call the Nameless One and Lady Frieda Harris paints with vibrancy, such gleeful fervor emanating from her Thoth deck’s dancing skeleton with his black scythe and black bucket helmet tilted askew.

Mary on the Death Card:

…I figured that since the cards gave both Tania and me Death by way of playing a little joke on us, I probably wouldn’t have much that related to it all month.  But I was wrong.  I’ve never had a card of the month that talked to me as much as Death did this past month.  The whole month was like one big ending/cleansing/cleaning up of the past and there was some real death in it too.

My thanks to Robyn Beattie for her beautiful photos and artwork, as always, my gratitude for her collaboration.
Posted by Tania Pryputniewicz at 12:15 PM No comments: