Forthcoming soon from Connotations Press: Ananda’s Line, a series of five poems inspired by the life of the late sculptor, artist, writer Ananda Beattie. Poems are paired with the photographs of Robyn Beattie; interviews with the poet and photographer will also be featured. Born in San Francisco on July 9, 1958, Ananda received her BA in art at Sonoma State University; she passed away on June 2, 2008.

Alice in Flames: Going Back to Work After 10 Years at Home 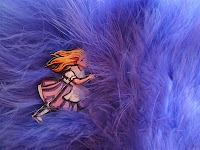 Now it is more possible for a woman writer to be seen as, well, just that: neither nun nor orgiastic priestess, neither more nor less than human. --Margaret Atwood, Negotiating with the Dead: A Writer on Writing
I’m living at the mercy of some kind of activity induced vertigo, experimenting with the chronic assumption I can do it all. One of the vertigo’s contradictory side-effects, along with inhibited memory, is that it strengthens my mind’s way of stumbling upon the most vibrant version of the past, or version of someone’s name, in this case, a writer I’d read about in a newsletter. Her actual name is Ingrid Hill, but for whatever reason, I started calling her Iris Hunt (after reading the alleged account, in Glimmer Train's Bulletin, of her dedication to writing while raising her 11 children, the husband who walked out for a number of reasons, among others, complications arising from her success as a writer competing with his writing career). When I Googled to find out more about her and her powerful writings and couldn’t find her, I had to recheck Glimmer Train’s bulletin for her actual name, Ingrid Hill. Who then is Iris Hunt?

Maybe the self of mine rushing headlong away from the hole like Alice running against the backdrop of blue flame in Robyn’s photo. Foremost on my brain: how not to be a slip-shod sybil* under the demands of August. Which include: descending back into the realm of teaching freshman composition for the first time in ten years, one son changing schools, my overworked husband missing more flights than you can count on one hand, and the anxiety of living in two cities and hemorrhaging money while making money. *(I borrow the term from Germaine Greer, from her book by the same title--Slip-Shod Sybils—in which she “recount[s] the sad careers and frequently grim deaths of female poets from the late eighteenth to the mid-twentieth centuries” pp. 88-89 Margaret Atwood, Negotiating with the Dead: A Writer on Writing).

Here in present time my littlest son repeats for the fifth time, The one with the stinkiest tail gets the female, laughing infectiously with his brother, both sets of their bare feet skimming recklessly near the end of the couch in front of the hot woodburning stove, my husband maniacally filling the wheelbarrow outside with leftover clods of dirt and concrete from the deck extension construction we’re apparently undergoing (because why would you build a scaffold to stand on in order to shingle that side of the house when you could build a deck). Cheerful, busier than an ant colony, this family; I do best forgetting I’m a nun trapped in a mother’s life, since this life is the only life I can imagine having, or I’d have mapped it differently by now.

Much later in the night, near 10 p.m., after taming some misplaced feminist ire that rears up in me when I notice I’m still 90% on duty at my faculty BBQ watching the kids while my husband makes friends for us with my new colleagues (misplaced ire--because the moment I ask him to watch the kids, he does), there’s a timid knock on our front door. Against the pitch black sky stands a young terrified girl, shaking as I hand her a glass of water and my telephone. I don’t know what happened. All of a sudden I was in the ditch.
I make her a cup of tea, wrap a scarf around my neck, follow her out into the cold and dense tree-canopy dark, my Boy Scout son bursting out in front of us, his swiss-army knife flashlight illuminating the gravel, and 100 yards further, her car, one wheel lodged into the right bank. A series of long white scrapes flanks the passenger’s side door, the hood sheened dull green with pollen, dust, and a torn branch of maple leaves. We trace the maybe of her path: towards the right side of the road (with its twenty foot drop to the creekbed) followed by her overcorrection that sent her car scraping against the opposite bank of the road to land safely here.

I wait until her boyfriend’s lights rounded the hilltop above us, then leave them to the dark and their decisions. Back in our house, we’d just finished bedtime stories and turned out our lights when the second knock came. As I sat on the couch in my robe for the hour of phone calls to parents and insurance, I couldn’t help but think of my own daughter, the cars in her future, hoping that a stranger might make her tea, offer her help when she needed it.

I feel for the girl before me, head in her hands at my kitchen table, battling her fears about the fallout from her accident, how her peers and family will see her now. I remember a kid at school who crashed his car, how people talked about him. I don’t want to be that kid, she repeats. We talk long enough to discover she knows the grand-daughter of the man who built our house. When she stands up to go, she turns to me and says, I like the artwork in your house. And I like it that people know one another out here. Then thanks me for the use of the phone.

For the next 45 minutes, the dim red taillights of the boyfriend’s car winking against the ceiling, I can’t sleep. I hear the clanking of Triple A’s chains, the sound of the hydraulics it takes to maneuver her car onto the flatbed, the labored sound of the towtruck’s motor ascending the hill towards town. I realize, in the ensuing stillness, that I’m no longer at the mercy of the chaos and vertigo of the day’s responsibilities and sign off with God by giving thanks for the young woman returning to her mother unharmed, for the home we were able to invite her into (if only for an hour) and for the kind strangers of my daughter’s future.

Interview with Ingrid Hill, featuring her book Urusla, Under at Bookslut: http://www.bookslut.com/features/2005_07_005950.php
Posted by Tania Pryputniewicz at 3:08 PM 5 comments: