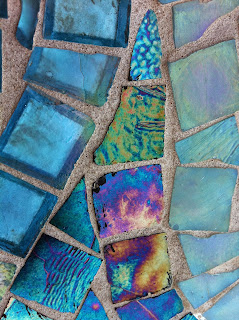 "There is no single location of miracle..."
Mark Doty, My Alexandria, from the poem Advent Calendars

Let’s say the sun were made of words. And the poet in the direct line of its transmission. So she spends her life spinning words back out in a carousel of patterns across a hardwood floor…a halo of fractal replicas of her many angles sliding like minnows across bare feet. Raveling the light/words into discrete units of color…dually winnowing and amplifying.

I aspire to be a suncatcher, though sometimes I feel more like a shadowcaster. I realized this when I went through my own poems looking for a “sunny” poem for Nicelle Davis who has offered to paint poems across umbrellas she will give away at AWP, Seattle 2014 (send her a poem for the Living Poetry Project’s RAIN). Though she didn’t specify what kind of poem she wanted, I sent her a darkly celebratory marriage poem, The Painter’s Wife, only because it mentions rain. 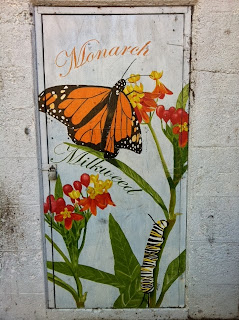 Then some other self in me perked up and decided a sunny poem might be “nice,” and you can guess the rest, I started the tallying of dark vs. light poems…until an hour later...I implored my husband and the Husky to rescue me for coffee. (My husband, reading over my shoulder, says I should drop words like fractal, raveling. But I play to stay sane on this personal blog in a way I don’t on other sites. So weigh in: can you stand lead-ins with metaphors? Even long-winded, mixed ones?)

On the upside, all this talk of rain made me miss the Midwestern storms of Iowa City where one can count on a righteous soaking while riding a bicycle home from work, raindrops as firm and as thick as a melon scooper’s chilled butter balls. To say nothing of the lightning, no simple jag, threading instead with multiple tendrils multiple banks of clouds, outdone only by the thunder, rolling, growing momentum, to land on the roof of one’s heart. I'm hoping one of these summers to return to either partake as a student and/or teacher at the Iowa Summer Writing Festival. 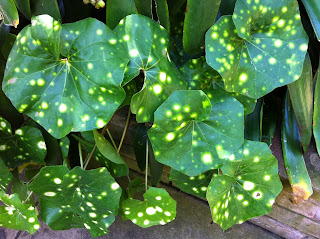 Since last posting I’ve made more than one trip to Balboa Gardens, fallen in love with the lily pond and the shady relief of the botanical gardens where the redwood lath creates a lattice of shade where constellations of leopard plants reign, their pale spots more like stars fallen straight from the Milky Way. Found new saints to research at The Timken Art Museum and stood in awe in front of Rembrandt’s St. Bartholomew (taking the docent’s cue to discern the signature dimly present beside St. Bartholomew’s face). Ate lunch in the sculpture garden with Aunt Rose and stood beneath the elephantine roots of the trees gracing the tiny amphitheater where three butterfly doors announce the existence of Zoro Garden (named after Zorine, the "queen of the nudist colony's pageant" formerly hosted on this site during the 1935 California Pacific International Exposition according to Balboa Park's website). 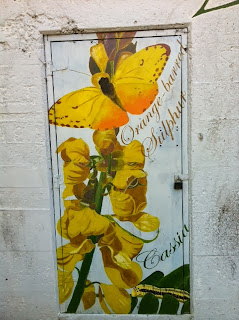 What I love about these butterfly doors is that each depicts the butterfly and the cocoon perched on corresponding plant of choice. That the doors are closed, set as they are up a tiny flight of stairs and embedded in the hillside. What lies behind them? Who gets to go through? Are you watching? Are you next?

Lately, with the forthcoming publication of my first poetry collection (November Butterfly, Saddle Road Press, 2014) I feel dogged by the Emperor's New Clothes syndrome, akin to the shadowcaster fears discussed above. Or to use a metaphor from the tattoo artist world, "my canvas is in a bit of pain"...suffering a projected anxiousness about exposure. One thing to write quietly and share one poem at a time here and there. Another to shift psyche to grow into a self with a book on its way.

But the storm is mostly in my head; when I open my eyes, I see what I need to see to keep going. Nicelle Davis (umbrella girl), fearless luminary, gives me courage and inspires me to take risks in my work; especially via her latest poetry collection from Red Hen Press, Becoming Judas. The title metaphor creates an amazing stage for what she'll explore in an eclectic weave of prose poem, Biblical reference, song and image play, poems juxtaposed with illustrations by Cheryl Gross. I was not only fascinated by her way of confessing assumptions while defining her childhood's constructed faith, but moved by how far she takes us in to her relationship to faith's veerings and the mother/daughter nexus of lifelong bonding and individuation. 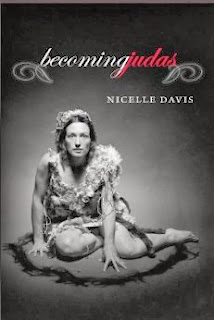 Just for context on defining constructed faith, here's a couple lines from her poem Disclaimer: Assumptions Made By This Homemade Religion: "I mistook the pastel picture/ of Jesus hung in every home for John Lennon. Both/ called the Prince of Peace." As I read the collection, questions burgeoned, and I put on my Mother Writer Mentor hat and asked Nicelle, what is it like to write poems about one's mother? To reveal and honor the depth of that connection, as evidenced by lines that ignite the imagination of the reader: "[My mother is the one] who put me in this blue dress lit on fire..."


In return we received much more than a guest post from Nicelle; I'd call it a prose aubade for her mother, No Love is Singular: Confessions of a Poet Daughter accompanied generously by photographs and two poems from Becoming Judas. I took comfort in not only her poems, but her words about the process of reckoning with having written those poems:

Yes, [my mother is] "the one who put me in this blue dress lit on fire,” but there would be nothing without fire to burn new ground, to open the potential found in a fallen seed.

I wrote my mother into a book to tell her she is my fire, but this has and will be read wrong. Fine. Damned if you do, damned if you don’t. We can’t get it right—I’ll never be good—but there is potential in every effort. Fire and love are interchangeable verbs." 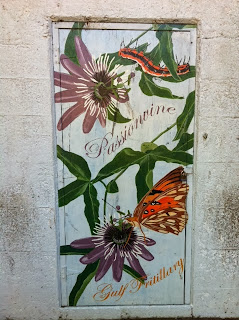 I love Nicelle's reminder here about the powerlessness writers face when allowing work to go out into the world. When it enters the public domain, public questions arise. I asked her mine. But that risk and that bravery she exhibits in putting both work and process reflections out there affords other writers a measure of strength, a nod, a "come along" if you will.

Another process boon for the anxious writing self comes via Barbara Ann Yoder's book I had the privilege to read in draft form. She defines her forthcoming book as a "guide to overcoming self-censorship." Here's a link to the page where she offers excerpts full of exercises: A Breakthrough Book for Women Writers. Or jump straight to one of the excerpts here, Writing With Courage, in which you are asked to write a fairytale about yourself and your writing life.

And my other combative strategy isn't really a strategy, it's just where the joy is: creating new work. Here are links and teaser first lines to the latest Perhaps Maybe collaborations. Liz Brennan is ready for more collaborators, so please send her a prose Perhaps to which she'll craft a Maybe or maybe she'll send it to me, or perhaps you and a friend could team up and write your own pairing and send it to her. This first treads the line between humor and possibility from the threshold of witnessing a daughter on the verge of puberty (the possible boys of her future already talking later in the poem through metaphors of tree):

Text of Metaphors: Perhaps when my daughter orders me to stop using metaphors (You're not off the hook. Don't ride me. Give up the goat) she secretly likes it. I can't stop anyway...

Video recording of us reading Simply Poems (a reading with a breeze):  Perhaps until a spot more fertile for the flower is found, its pale shade stands as a reminder of what must come. Because leaves understand the inevitable, do we need to be told?

This one turns on a powerful short story by Isaac Asimov, written in 1956, that has astounding relevancy for our technologically dependent and saturated state of being. Should we rely on people or machines when we use up our planet's resources? Neither? Both?  Here's Asimov's Last Question and here's how Liz started us off down our own line of questioning:

Text of The Last Question:  Perhaps while we can’t yet turn smoke and ash back into a tree, we can 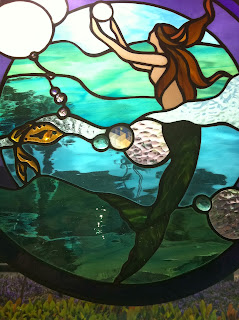 train impossibly shattered things to mend themselves: a crushed hope, a fractured trust – an anguish suspended in a dream...

Which in turn inspired a miniscule debate about entropy. Maybe love is the opposite of entropy, but for this perhaps maybe, we settled on light:

Text of Light: Perhaps light is the opposite of entropy, travelling at a speed hummingbirds match in nectared dreams of planets without kestrels...

Further reading:Cathe Shubert, another AROHO find, offers an infusion of poetry goodwill here; she argues why poetry matters... in an essay she wrote last summer at Breadloaf: In Praise of a Poetry of Action.

October 10 addition: Just came across this beautiful process post by Marilyn Bousquin in which she addresses the ways men and women react to rejection in  On Shameless Self-promotion: Keep Hitting the Send Button; she takes apart the concept of shameless self-promotion by looking at the role of shame in women's writing lives.

Photos: are mine with exception of the cover for Becoming Judas; the stained glass mermaid above is the artwork of stained glass artist Rebecca Lichau out of Sonoma County.
Posted by Tania Pryputniewicz at 1:30 PM 8 comments: