Ladder to the Moon: Child vs. Art, Mother vs. Writer, 2D3D Best of Show Award


A reproduction of Georgia O’Keeffe’s painting of a tan-veering-peach ladder suspended in a deepening turquoise sky between a white half moon and the dusk blackened outline of the desert cliff-line sits on a small balsawood side table in my writing cabin. Her un-peopled scape invites calm. And multiple identifications: are you moon, sleeping cliff-line, or ladder floating noncommittally between earth and moon?

﻿﻿﻿﻿I choose ladder, substitute body, of any working artist or writer. An image of that perpetual reach for the celestial, rung by rung, met by opposing pull of  gravity, a side-effect of incarnation and the need to ground one’s pathway to beauty.


And one’s pathway through pain. Last week’s gravity took my six year old off the end of a rope swing and onto the hill so hard that he broke his elbow. One-hundred yards below him in the house, I heard the unmistakable ER scream and fled to retrieve him.


Shortly before midnight, x-rays endured, temporary cast hotly hardening, my son asked me to pull over on our way home to give him pain medicine. Thus began our seven night vigil, wee morning hours of movies, so many times he watched Clone Wars to distract him from the itching brought on by the narcotic grade Tylenol that I caught him watching the series in French.


Tension remains high in my internal world. I am hands down a mother. And hands down a writer, my husband out of town for the accident and for the ensuing weekend as he’d signed up to take an extra shift at his military job to help out with Hell Week (that grueling no-sleep training nightmare week aspiring SEALS attempt to survive). When my husband calls, I can hear the sound of grenade simulators, the panicked din of male voices. Lost in my own world of 2 a.m. advice nurse blues, I don’t have much empathy for his exhaustion given mine, my plaintive refrain, “When are you coming home?”

The following week, the scheduling gods play a cruel joke, landing my son’s elbow surgery on the same day as a reception for the 2D3D poetry show where my collaborator Robyn and I were long anticipating meeting the makers of the various works of art comprising the show, for which three of our photo poem montage micro movies had been chosen.


Every mother writer knows the push and pull between her soul work (for me, writing) and her other soul work (for me, childrearing). I’d decided to let go of making it to the reception. Until the very night of the surgery, when my son woke at 3 a.m. His pain subsided with the appearance of the i-pad. Drugged by video play, he thumbed his way merrily past sunrise and beyond the day of his surgery. I felt trumped by video game, invisible, though grateful.


My husband, finally home from hell week to intercept mine, tried to convince me he could handle the post surgery care for 6 hours until I’d return from the reception.  “I’m his father…I’m here. You be here for when he goes in to surgery and I’ll be here when he wakes up.” Trying not to either over or under inflate my importance, operating on the dimmed batteries of a sleep-deprived brain, I called Robyn and asked her if she’d be on standby in case the surgery timetable shifted enough for me to kiss my child when he woke up from anesthesia and sprint to the reception.


Which is in fact what happened—the surgeon finished earlier than expected…so I tarried long enough to see my son wake up, to kiss him, to hold his hand while they controlled his pain enough for him to fall back asleep. My husband and daughter then took over.


But even as we drove out of the hospital parking lot, dress, heels, spare dress and spare heels rolled up in my purse (“the last thing you need to do is break a heel!” joked Robyn “so bring spares”), time had advanced to 3:00, with a 3 hour drive to Stockton ahead of us, putting us an hour into the reception. Robyn, sensing my hesitation, asked me what I wanted to do. We even considered keeping it simple by stopping instead at Paradise Ridge to see the new sculptures in the garden.


Vacillating, with each mile we drove away from my son and despite the smiling photo my husband texted along with, “He’s fine, just go!” my body began to register the stress. I realized my car would be locked in the hospital parking lot. By the time I contacted hospital security, nausea kicked in to looping images of my son’s IV momentarily backing up with blood and his face once the morphine finally eased his pain.


As if on universal cue, traffic came to a halt on Highway 121 due to an accident, followed by miles of glittering semis backed up before we could get on Highway 80. We did our driving math and realized by now we’d get to with fifteen minutes to spare before the reception ended (if we were lucky). We took a deep breath and turned around.


Immediately, the nausea backed off. In further universal collusion, as if to say, you can do right by your child and do right by your art, we received a message from the Gallery Director telling us she understood we couldn’t make it, followed by the news that we’d been awarded Juror's Best of Show. Once we got within a half hour’s distance of home, we stopped and celebrated our achievement by going out to dinner, where we found great delight in the rush and swirl of the short-staffed restaurant, the chef racing out eventually to help, sweating but good naturedly delivering our bill, dessert, and fortunes seconding the award we’d received.


That night, the Siberian Husky and the husband sequestered three-quarters of the bed. With our cast-elbowed child between us, I found myself on the usual end rind of the bed. I fell blissfully asleep relieved to be within my son’s earshot, quietly grateful for the cold air coming in through the screen, the sky where we live as black as the Pedernal mountains in O’Keeffe’s painting. I could easily conjure the sensation of climbing her ladder towards the moon.
Further Reading:
Awards for the 2D3D Visual Poetry: Works Inspired by Literature and Poetry at San Joaquin Delta College, Delta Center for the Arts, LH Horton Jr. Gallery, 2012: 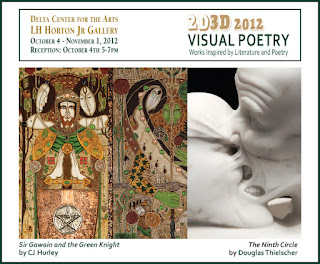 To view the entire 2D3D Poetry Show: visit the website. From there you can read Chandra Cerrito's Juror Statement as well as visit participating artist statements and see images of the work interpreting lines of poetry from a wide range of sources.
Juror's Awards:
Best of Show: Tania Pryputniewicz and Robyn Beattie (Amelia, Nefertiti Among Us, She Dressed in a Hurry for Lady Di).
2nd Place: Colleeen Ellis, "Abdul"
Ellis characterizes her work in her artist statement as "Inspired by Islamic design (and the challenge of creating human form without people)" which  results in artwork she hopes will " add another layer of humanity and meaning to the beauty of Islamic gemoetric design, while also seeing a place and the people who live and work there, in a new, perhaps more poetic, more humanstic, way."
3rd Place: "Graham Stephens, "Physical Etymology I & II"
From the artist statement of Stephens: "I find myself drawn to mechanical processes, vintage equimpment, sotries of exploration and innovation, and popular culture."
Gallery Awards:
Best of Show 2D: CJ Hurley, "Sir Gawain and the Green Knight"
From Hurley's artist statement: "My artwork compares and contrasts the Pagan, Christian, historical and literary symbolism of the poem (14th Century Sir Gawain and the Green Knight)." (Image appears on the visual postcard.)
Best of Show 3D: Doug Thielscher, "Babble"
From Thielscher's artist statement, "...I want to capture the moment of greatest tension in a story. I find that by reducing the composition to only the most expressive gestures of a scene I am able to better highlight the emotional intensity at the climactic point in time."
Thielscher's other work, "Ninth Circle," (based on Dante's "Inferno" appears on the visual postcard).
To view all four of our photo montages: visit my website.
Here you will also find a link to view the first Nefertiti montage we made, titled, Nefertiti on the Astral.
To view photographer Robyn's work: visit her website.
Posted by Tania Pryputniewicz at 2:34 PM 2 comments: