Notes from the Road: Footprints, Storefronts and Valentine Mimes 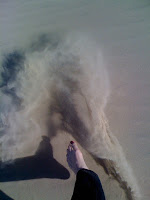 This Valentine's Day we did the moonscape—the snowdrop white Pismo Dunes, pristine and lovely where the kids babooned up and down for hours. Sheer cliffs away, we never lost sight of our three speedsters against the two color panorama—miles of blue sky, miles of warm, gold sand with wind-sculpted ribs we couldn’t resist footprinting. 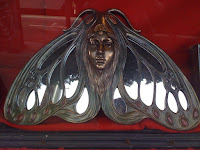 I set this storefront photo aside for the infamous day of love--took this photo on a recent excursion with my niece Natasha in San Francisco. 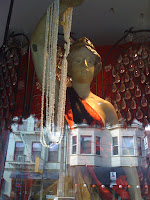 And this one—we both loved the way the houses across the street reflect over the statue’s torso.

Also wanted to share this intriguing call for submissions for an anthology from writer LA Slugocki at her site: Tales from the Velvet Chamber (http://talesfromthevelvetchamber.blogspot.com/). She is looking for:

Stories that radically revise stereotypes of "bad women" in the Bible, in myth and in fairy-tales. Stories that aren't afraid to be literary, transgressive, dark, and sexy. Think: Lilith, Medea, the Wicked Stepmother, the Evil Witch, Pandora, Eve, crones, sibyls, fates, muses. Contemporary adaptations are fine. Mythical adapations equally welcome. The spine: We begin to see these women through another lens.

I came across this call for entries, and a plethora of other inspiring ideas, through She Writes (http://www.shewrites.com/) —a fabulous network comprised of over 5000 women writers, editors, bloggers, you name it, all talking about writing and what it takes (from first time writers to seasoned published, book-toured authors). Hope you’ll check them out, and consider joining. Sometimes I get “internet head” or “high speed fog” with all the social networking outlets tugging at my writer’s time, but I love having the option to post specific questions and mingle with writers from around the world minus cost of airfare.

I had it in my head to post this poem for St. Valentine, but was eclipsed by the road trip and a less than spectacular ability to keep a grip on my (self-imposed) deadlines while driving, so here it is, a belated, cynical Valentine, just for fun, contrary as it is to my current state of relative equanimity.

the mime his concentration
like the chased in a pair of lovers
lost to the now, so busy moving,
gloved hands ever edging the door,

or women their addictions of the moon,
marking their gardens with morning blood
in cups of tin to ward off deer (in the knotted spent lust
of chocolate, tears over road-kill, yelling at the kids)

or young boys their absolute
disinterest in girls, given
the thrill of dead cars, bottles to shoot,
a can of beer to split in the fort

or Cupid his logic, messy as wolves in Grandmother’s
clothes and hatchets. Granted: one’s fated to grow,
bad love’s still love. And after, one’s less likely to join
the casually cruel in the audience willing the mime to falter. 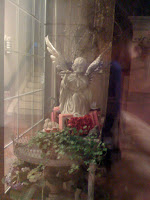 I will be reading a couple poems at the March 6, 2010 mini WOW (Women on Writing) Conference at Skyline College for a 3 minute open mic spot I've been promised. Haven't read in public since 2005 (Copperfields Bookstore, one poem), so I'm a little nervous. But even I can get through 3 minutes of reading. By 2015 maybe I'll be up to 3 poem readings. Looking forward to the face-to-face contact with other writers after so many months of e-mail or blog comment conversations.


Coronado Storefront
Posted by Tania Pryputniewicz at 11:22 AM 3 comments:

I spent today interviewing my friend Lydia Stewart regarding the volunteer work she has done for the past eight years at the California Parenting Insitute (for an article forthcoming at The Fertile Source—I’ll post the link when live) on behalf of women, children, and families in Sonoma County. Lydia serves on the board of CPI, all while raising her three young boys. I asked her where she’d like to see her career lead her in the future , and we ended by talking about how much of one’s heart goes into non-profit work (though, after today, following Lydia’s example, I’ll try to remember to say, “social profit” work). How or when do you pursue your own dreams, I asked her? With such a rich history of giving behind her, this Valentine’s Day I wish her love and courage to pursue her heart of hearts. Lydia, you inspire me.

A second friend comes to mind as I reflect on love in its many forms—writer Penina Taesali, who I’ve been blessed to know for the last 19 years. We met in an undergraduate poetry workshop at the University of California, Davis, and became fast friends. She, like Lydia, is a community saint, who has given tirelessly to the youth and families of Oakland; in recent conversations with her, I love hearing she’s beginning to turn that same compassion towards herself as she pursues her goals as a writer. In honor of Valentines Day, I wanted to post this blockprint design, titled, “Threshold,” I carved and rolled out in July of 2001 for Penina when she lost her father. In my notebook of blockprint drafts, I had recorded: 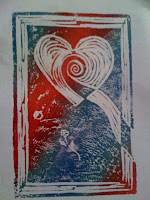 Penina shares my sun, moon, and rising sign—our birthdays two days apart-- my “older sister”, 11 years my senior. The news of her father’s heart attack registered as a physical pain in my heart and I needed to make this for her. Her father: deep orange and red, poppies, monk, wise man, gentle. A beautiful, tall, strapping Samoan man with a large Samoan heart. He nurtured Penina, urged her to follow her heart and write. I intended to have many poppies, but instead, this is what came: a door, the spiral path to the heart. And the door-- a false barrier, falsely open or shut, because love remains omnipresent. While I intended to have many flowers, simplicity won out: one heart, one door, one flower.

I’m hoping to roll out a cleaner print for you--but that could take some months to get to--seems I've given away all my favorite ones in the mail. Consider this one a bookmark. I also hope to get permission to post one of Penina’s beautiful stanzas she’s written about her father so you may have her words; my love to them both and to you all.
Posted by Tania Pryputniewicz at 5:51 PM No comments: 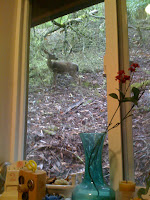 "...the/mockingbird is mocking me, as one who either/knows enough already or knows enough to be/perfectly content not knowing..." Mary Oliver, from "Daisies", Why I Wake Early

Four deer eat Spanish moss on the hill above my cabin from a tan oak tree top downed by the last storm. Their burro ears twitch warily when I raise my cup of tea off my writing desk for a surreptitious sip, the movement enough to stall them, green moss tines wriggling in their jaws as they asses me assessing them. I have the mild urge to pet them, but know from the Fair Zoo how bony they are. On their end: a mild urge to flee--a stalemate--clearly they sense I’m just another deranged writer hunkered down to my desk chair five feet beneath them, a double-pane window and a damp, steep incline between us.

I’ve been waking with night dreams vapored. Fire: out. Deck boards: amphibious. No end to the litany of to-dos, and the wheel of days showing no sign of slowing. What gives, when all the tiny tasks matter and one remains dogged by the desire to do each task well? You layer your time, right? Take stock of the good, stop dwelling on the unfinished, the how far to yet go?

I remember taking a class from a tarot reader/astrologer named Quan Tracey Cherry in Iowa City, arriving at his doorstep with a bouquet made up of the ferns and flowers I’d found between his door and mine. It was fall, and flowers were scarce—a dandelion or two. I came across a cardinal feather, some overgrown stalks of grass gone to seed, some browning ginkgo leaves. Plenty to harvest, when I let go of my idea of bouquet and looked closely along the sidewalk for what was actually there: the odd bit of bark, the lichen covered twigs.

This year, driving, in the absence of sidewalks, weeds, and tarot, I’m gathering animals. Tracking them on the daily drive to and from town, two, sometimes three round trips. The yield: crows, crows, always raucous crows. Blackberry sparrows fleeing my van on Green Valley. Wild turkeys, gangling away, flustered, around the man-made pond at Lazy G Ranch. The kids and I spout out a greeting to the black goat, speculate he’s forgotten he’s a goat, so near he loves to stand to the white horse. One pert, pesky blue-jay right before Bones Road cruises the curve for crushed acorns. On Mill Station, the dark brown elongated heart-shaped shoulders of five turkey vultures congregate over a deer carcass in the ditch. Finally, in the rain plush grass of the kids’ school, forty or more robins feeding, and one massive crow strutting in their midst.

Later, animal totems of the day recorded in my journal, I spend a futile portion of the night trying to reassemble Rudy, my son’s 52 piece interlocking balsa wood Tyrannosaurus Rex. A xmas gift from my brother’s sweetheart, Rudy took residence in my son’s heart from the moment Maria took the time to snap him together (smart girl, suspecting accurately the fate of gifts delivered for future unsupervised assembly). Rudy’d fare better glued together and placed high on a shelf. But once named, along with my daughter’s matching interlocking Brontesaurus (Sally), he acquired stuffed animal status and slept under blankets. Ever since, we find dinosaur spine bits and forelegs in the couch, under the table, in the tangle of blankets at the foot of the bed. Though five goes of scotch tape refuse to repair his broken tail, Rudy’s got most of his outline. I gather up his errant parts and plunk them in a cup, tail end ferning up into the air.
Posted by Tania Pryputniewicz at 4:10 PM 5 comments: