Watching shiny ribbons of blackstrap molasses fold into one another in a silver measuring cup. The kids rolling out dough, shaping their ginger kin. A week of late nights baking, knitting scarves, wrapping, rushing to and from, and voila: Christmas Eve, signaling an end to last minute everything.

I’m seeing the sky again—a good sign—easy to go for weeks without looking up. There’s a section of our country road I watch for now, just after a steep set of S turns sloping down. As you ascend the next curve, the oak trees on either side of the road lean towards one another, leaving a gap of sky in the shape of an hourglass. It is nearly five, and darkening rapidly: the hour of leaping deer. The pavement wet, wisps of mist hovering just above three rows of nested hills, the farthest tree-line a dusky blue, so familiar it warms.

Easy also, between hand-me-down Safari brochures (Africa! India! Egypt!), books on spiritual pilgrimage, and e-mail advertisements for prophecy retreats, to feel anywhere but here is better. If I just had the right guide, the right ticket, I could travel to the right place, imbibe the right information, and grow, bigtime. In The Camino: A Journey of the Spirit, Shirley MacLaine writes about why the physical landscape (the 500 mile famed trek along the Santiago de Compostela Camino in Spain) so dramatically affects walkers and propels them into grappling with unresolved life issues (here via the character of St. John of the Cross) :

“the ley lines [along the walk] were directly aligned with the constellations of stars, which would help resolve conflicts if properly understood…The dreams and visions of people walking the trail created footmarks of past truth, which created reminiscences, which were part of the human subconscious lurking within each of us as foreshadowings. (p. 85).” Further… “people always return to old haunts because they intuit that the karma there needs to be resolved.”

For a former spiritual “quester” (dream group, channeling group, reiki trade, chronic swapper with fellow book divas of destiny such as Kieran, Childs, Duane), motherhood grounds me squarely on this acre, or this 30 mile radius of S curves. I’m thinking you could “walk the Camino” in dream. Wondering if your astral self would soak in that kind of info-energy (to borrow a term from Gary E. Schwartz, author of The Afterlife Experiments). Or, is the physical body a better conduit, and it’ll (the trip to Spain) just have to wait until the kids are in college? Maybe you’re better off just sleeping when you sleep, since the daytrip with the kids burns so many brain calories, and you need the “down-charge” of dreamless rest.

Or could that lovely hourglass gap between the trees be its own portal? I’m just asking. But now that I’ve asked, I’ve probably set in motion a pilgrimage of dreams. Let them be be hearty, but sweet.

Last May, I gave sculptor Sandy Frank a handful of poems (so she could choose one to pen across one of her magnificent male torsos). We're not through yet--but I wanted to post the poem and photo in honor of the approaching solstice. Combining the static element of written words and penning them across a 3-d surface has its challenges, and Sandy tells me the alchemy is far from perfected (she has other ideas in store), but here is a "draft" of our project so far.

Winter Solstice
Live long enough and you outlive
somewhere a lover, one you cast aside
or one you chased. One who didn't want you--
at least, not then--or one you cried to leave, but left.
No matter what the parting, there's a last meeting
in the eggplant black of dream, where we divide up all the eggs,
and ride a Lapland sled, our unborn children
falling in the snow. We'll not stop--
we have no choice: you're dying
and outside the dream my husband's body
turns towards mine. The Earth's
one lover lighter. The Northern lights
remain, the silver sound-prints of the reindeer's bell.

Forgive the iphone snapshots--I promise a link to studio quality photos (the full sculptures extend to upper thigh, complete with male genitalia) and a January post with Sandy's thoughts on the sculpture-poetry process (post-holiday frenzy).

Sandy's work: http://www.sandyfrankfineart.com/
Posted by Tania Pryputniewicz at 9:42 AM 4 comments:

“Niagara Falls” and “Birth Angel” Up 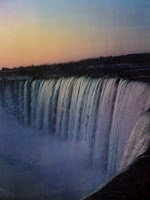 Niagara Falls—written for my late stepfather Jon—is up at Tiny Lights: http://www.tiny-lights.com/flash.php?id=265
…When I couldn’t sleep at dawn, you brought me for a walk along the rim. Then took your own photo of the silver shelf at the top, so still who’d guess at the crystal thunder below, how delicate the thresholds, and our balance, dreaming, taking turns, half the planet flooding the astral at a time…

Also I’m sweetly honored/pleased to announce I’ve accepted an invitation from editor Jessica Powers to try the wearing of a new hat: as poetry editor at The Fertile Source (view Jessica’s welcome and one of my blockprints, “Birth Angel:” http://fertilesource.com/?p=578 ). Birth Angel dates back to the “one-child” year (before the next two children came along), when I entertained the possibility of earning a living making handmade greeting cards. The 50 cent industry profit, along with motherhood, swiftly whittled my list of loves down to two essentials: family and poetry.

Though I still am tempted (now that I’m able to consider the world above the diaper line again) to rummage loose the tubes of color and the little black Speedball roller. Washing the printboard off, watching the blues and golds and greens swirl down into the sink drain still trumps the finished artwork, I have to admit. Even tried photographing it--but like rainbows in oil slicks or Tibetan sand paintings you just have to Be Present all alone with your joy and the morphing colors vanishing before your eyes, sappy as it sounds.
Posted by Tania Pryputniewicz at 3:18 PM 2 comments: