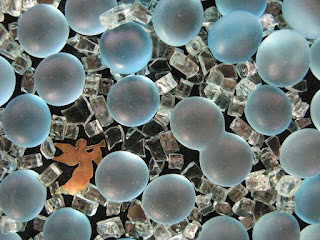 All God’s angels come to us disguised…—James Russell Lowell
....and regardless of the mood we inhabit, in my case, an extreme case of grumpiness spurred by relocating to a (for backstory, see A Daughter, Sand Angels and the Sun).


With frustration lingering, children, husky and husband in tow, I plowed down the Coronado dunes of SEAL beach, desolate but for our family on that particular Saturday, where on any given week day, you’ll find SEALS-to-be swarming the sand, running in groups, one boat a group balanced and bobbing on the stocky necks and heads of the men.
Or storming the surf, linked arm to arm and dropping flat onto muscled backs right at the tide line, waves flowing in, flowing out, over their shivering bodies. Later still, after sunset, find them slipping stealthily into the water wreathed in the green glow of chem lights to withstand what they withstand on their way to soldier-hood. 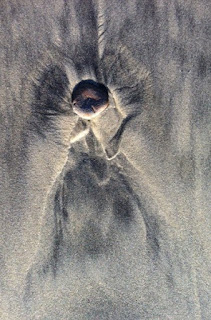 But I wasn’t thinking about any of this, too lost in my own dark spiral of tension, when up out of the sand waved this little creature who turned out to be one of many angels formed by the convergence of late afternoon sun, beached pebbles and the patterns left by retreating waves repositioning the silvering to black and tan sand into robes and hems and waving arms.


I fired off a few images to my photo poem montage collaborator Robyn Beattie…(she’s the real photographer) and thus began an angel image volley, in which I scored the lovely blue pebbled image of Robyn's heading this post. And took delight in Robyn's recounting of photographs she coincidentally had just taken at the di Rosa Art Preserve in Napa of an installation we quickly fell into calling "the angel pit..."

...since, in the photo she sends me, it appears to be a jumble of white angel statues. Robyn tells me yet another angel, high overhead, like a sentry, circles the pit on an orbital track. I do not know the story behind the artist or even the true name of the installation, but no matter, the images haunt best, richest, unexplained.

Where mermaids took me by storm earlier this month, angels followed....first strung all along the beach...and then in the garage of our new house where I found perched above the washing machine a plaster angel with face averted and broken wing covered in cobwebs. And unpacking boxes, the cover of a journal from years ago with a silver metal plate angel bronzing slowly with rust. 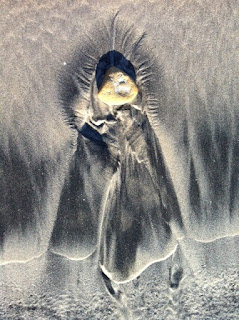 But it is the sand angels I want to share here. This next one I call "Dancing Angel," because of her tiny feet peeking out from under her cloak.

Later, with a hot cup of tea and from the comfort of a leather couch, I felt overcome with gratitude for the mirth of nature to jar me out of my funk as I read James Russell Lowell’s poem, The First Snowfall (1847), written upon the death of his daughter Blanche, I stood and watched by the window / the noiseless work of the sky / and the sudden flurries of snow birds.

The poem turns on a kiss for his remaining living daughter who kisses her grieving father back, unware that his kiss was given to her sister / Folded close under deepening snow.

I continue to give thanks for the century (and its advancements in medicine) I inhabit, in which unlike Lowell, (god willing) I will not face the almost certain loss of one or more of my children and spouse. 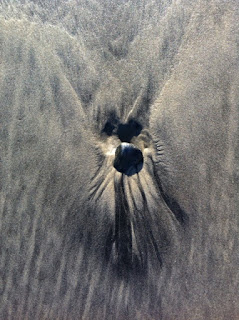 I'll close with "Angel Heart" (above), and "Praying Angel" (below), ever aware of the intense field of the sand these angels emerge from, coalescing intermittently between the myriad bootfalls of men straining towards prowess, trainees large enough of heart to risk incredible physical and mental duress in the service of the desire to protect.

And I can't close without a nod of gratitude to one of my everday angels, poet Liz Brennan, who has promised not to ditch me and perserveres in collaborating on Perhaps Maybe poems despite our physical separation. She has recently posted The Color of Lightning, Tenderness Calls (a tri poet effort, with Tess P), and From a Mage's Staff (Liz hooked Tess and I up). There's still room for you to join us...send Liz a Perhaps or a Maybe and she'll write up the other half or volley it on to one of her other contributors. 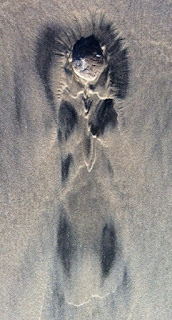 Tania, What wonderful photos and a great new theme!

Tania - What wonderful serendipity and a great new theme!