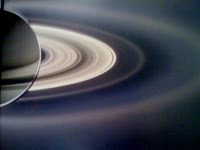 Sometimes, at night, I wish I’d married Norman / Mailer and just once would like to make a man / riding by on a bike lose his balance / and die...Rachel Zucker, from Museum of Accidents, Wave Books, 2009

I dreampt I was at conference, preparing to read. Only to discover the poems had been written so long ago I felt no enthusiasm for them. The woman next to me had decided to use the venue to display her other talents (besides the poems she came to read), in this case, her replica of Rodin’s El Beso, masterfully reproduced in bread dough. Baked.

Would you consider that a negative reduction of El Beso—from the high art of sculpture to food? Or maybe an honest elevation: when you are raising a family, what you produce, create, should translate to bread on the table.

I don’t have a clue. When I’m tired, I worry, my favorite adrenal-tapping habit, and fret over the old divisions, like the one between men and women, consider the opportunities my daughter will or will not have. Having birthed sons and a daughter, I understand on a cellular level my responsibility to rift-healing, shock-mending, for what good are divisions, blame, or complaining about who gets what when. Up to all of us to shape the possible future. Set a good example. Maybe get along with my spouse, that kind of nitty gritty: deceptively simple, pretty hard to do, absolutely worth the risk.

Or publish a book like Museum of Accidents, by Rachel Zucker, unflinching in its poet’s look at the female psyche under duress of childrearing and marriage, witty, sparse and full at the same time, as in poems like “The Day I Lost My De Ja Vu:” "now all of me but this is gone and I was never a girl./ never but mother never/ every same day new again. every way is without a way out or/way to look back, to be back, to bring the fabric into a tight/pucker or pocket or foxhole or hem, some little space to fall into a breath/like an open grave or little death. instead I learn bird names….” (p. 3).

My friend Sandy, who in fact sculpts, talks me down out of my anxiety: There are more women scientists now; our girls will be fine. She agrees with me when I protest, “shouldn’t we still ponder questions of women, charisma, power, and how far they do or do not get in pursuit of their potential?” I can’t help but glance over at my counter, where, coincidentally in alignment with what Sandy would say 24 hours later, just yesterday at the library, I’d scored 4 thick books to feed my son’s love for outer space, and one I grabbed as an afterthought, at eye-level when I stood up to leave the star section: Extraordinary Women Scientists, by Darlene R. Stille.

Stille devotes two pages or so a piece to 50 notable women scientists, from ornithologists to cosmonauts. After the excruciatingly long dance between the laptop on the counter (e-mail) and the fridge (suffering from leftover’s halitosis), stuffing yam shards and meatballs into zip-lock bags for the kids’ lunches, I skim the lives of these women. Every 8 paragraphs there’s a new face to take in. Born, blossomed, died. 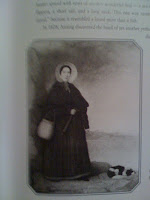 By 2 a.m. I’m luke-warm in my conviction we’ve come a long way since the first Greek woman adept at predicting lunar eclipses, or the perfume makers of Mesopotamia 3200 years ago, or the mob-murdered Hypatia of Egypt (mathematician, philosopher, teacher)...Or sisters like Sophio Brahe, assisting astronomer brother Tycho, did he? Or she? discover planets orbit in ellipses…Or the more eccentric, supernaturally guided Mary Anning, fossil hunter (fish-lizard: Ichthyosaurus, near lizard Plesiosaurus, and wing finger Pterodactyl) born in 1799. Legend has it little Mary survived a lightning strike (nestled safely in her pram) that her nurse, the pusher, did not.

I love that biography author Stille and her consultants (Angela V. Olinto PhD and Enid Schildkrout, PhD) took on the task of creating the volume before me. “Although the education of women in industrialized nations, in general, is no longer considered a waste, the message that girls and women are not suited for science and math is still prevalent. One of the purposes of this book is to prove that this negative message is nothing more than a myth. (p.9),” writes Stille in her introduction, more than ten years ago, long before my daughter (and my sons) had the example of Hillary Clinton, or Sarah Palin (should she be your cup of tea) to dream towards. 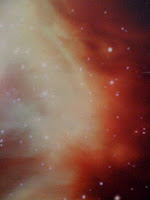 Later, sitting in the dim lighting by the wood burning stove, I read aloud to my sons from Planets, Stars, and Galaxies: A Visual Encyclopedia of Our Universe, by artist and writer David A. Aguilar. Dennis A. Tito, the first space tourist, writes, “We humans are essentially explorers, so we’ll always be interested in what lies just beyond the next hill or sea or star…” and I can’t help but think, so it is with writing…only the exploration does not involve light years of travel, just a willingness to track one’s night time dreams and the stamina to sit in a chair long enough to record what comes pulsing back through the asteroid belts and supernovas of one’s fractally wired, highly distracted mind.
Celestial "photos": artwork of David A. Aguilar, Planets, Stars and Galaxies
Mary Anning photo: Extraordinary Women Scientists
Posted by Tania Pryputniewicz at 4:15 PM

Damn, Tania, you can write. This post is great: intelligent, moving, and though-provoking.

"deceptively simple, pretty hard to do, absolutely worth the risk."

Gullible explorers at that, I guess, to keep going down into the fray repeatedly, for one more look, despite the heat. Thanks as always for stopping in and giving a kind word.