If Earhart were alive today, she’d be working on becoming the first woman on Mars…Amelia Earhart’s Shoes: Is the Mystery Solved by King, Jacobsen, Burns, and Spading (AltaMira Press, 2004)

If, like me, after writing your love poem for Amelia (see the poetry movie here, Amelia, or The Poem of Endings, melodious voice of Lori O'Hara, original arrangement on guitar by Michael Greenberg) you start reading everything you can about Amelia…you find layers of stories, some in adulation, some outlining conspiracies, but almost always without exception, looking for answers to her disappearance.


I’d prefer to stay with that first fictional burst of love: open sky, girl with the means to go where she will, unanchored, soaring.


But one ear turns to listen...though no less in love, sobered…﻿
…By questions like those raised by the late Kathleen C. Winters in Amelia Earhart: The Turbulent Life of an American Icon (Palgrave MacMillan Trade, 2010). Winters’ unapologetic perspective as a female aviator rounds out the dream version of Amelia and asks me to consider the costs and boons of alchemical marriage (publisher Putnam) and endorsements (BeechNut) and the shoulders of power (President Roosevelt and luncheons with his wife) and the wages of bravery and charisma propelling Amelia forward along a formidable itinerary of speaking and flying engagements… ...And most especially the hidden wages of prowess, under which, Winters goes as far as to hint,  those around Amelia may have signed her off to use equipment she wasn’t fully prepared to handle, garnering praise and attention, flaws overlooked or edited, even as she flew in a field of incredibly talented women pilots (her peers, some, some would argue, ahead of her in skill and ability…)


I want, as desperately as any other girl, the means to get lift under my wings…


…and the means to come back from each flight.


Winters closes with a note Amelia left for George before her fatal flight: Please know I am quite aware of the hazards of the trip. Women must try to do things as men have tried. When they fail, their failure must be but a challenge to others.


Thanks to Winters and her own risk-taking as a writer, I take time to consider the whole woman we idolized, not the one sculpted for public view. The fallible, vulnerable, risk-taking Amelia—we love you still.
Amelia Earhart
Born: July 24, 1897
Lost contact: July 2, 1937
Related links:


With gratitude for writer Kathleen C. Winters: 1949-2010; link takes you to her biography--her life as an accomplished aviator and process as a writer. Winters also wrote: Anne Morrow Lindbergh: First Lady of the Air. 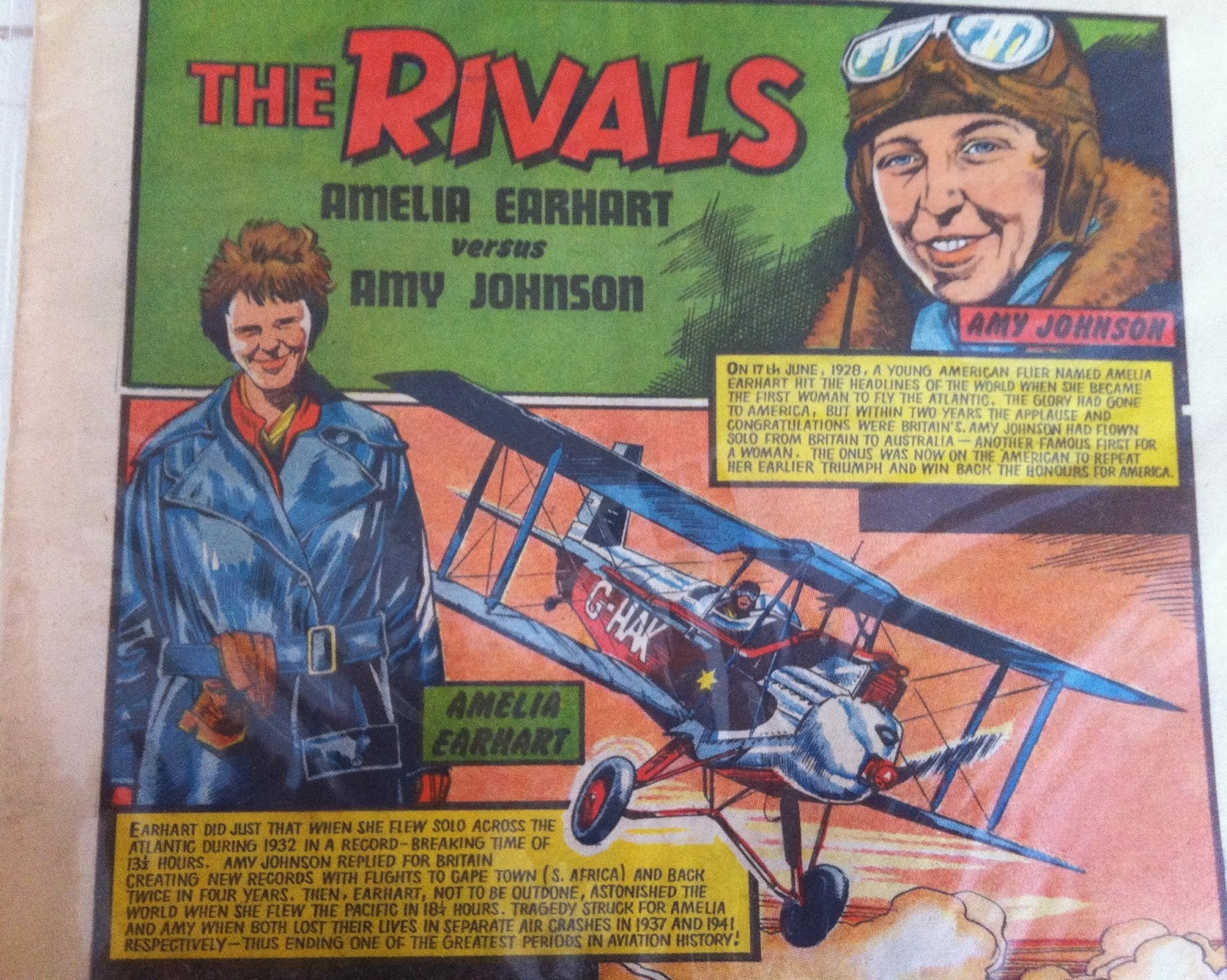 
Beautiful multi-view poem by Gabrielle Calvocoressi, Today in Literature, The Last Time I saw Amelia Earhart.
(Thanks is due to A Room of Her Own Foundation for the link.)
Image of the comics is from my husband's massive Valiant Collection roughly from 1962-1979. Here's the wiki on this version of Valiant. This one is the February 8, 1975 issue.
The shadow plane image was taken by Robyn Beattie, and is the shadow of the sculpture plane by Monty Monty, featured in the movie as well.
How do you prefer your heroines? How much do you know about the true life of yours? Name her here if you wish...
Posted by Tania Pryputniewicz at 3:56 PM