Excerpts from the Life of a Heavy Bleeder, or “…candy creates obedience, 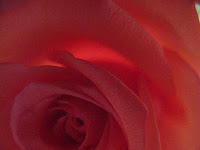 because the sugar opens your opiate receptors, which often feels like love” (Jackson Bliss, Spring 2010 Zyzzyva, p. 94)…a perfect line for this wickedly cold late May spring day, portable heater melting the top layer of skin off my ankles as I pop chocolate covered almonds into my mouth in my cabin in what must be a fit of p.m.s.

I come from a family of heavy bleeders. There’s a story of my mother, in the years before her hysterectomy, missing the curb and falling, one of her pumps flying into the street to land in front of a station wagon. Unbeknownst to her, menstrual blood had gushed down along the inside of her nylons, saturating the inside of the shoe.

When the driver of the station wagon got out to help, the race to the shoe was on. He beat her to it and she had a good deal of trouble convincing him she wasn’t injured, truly, she just needed to get to a bathroom.

Call it female virility, if you will—my family measures said virility by how much damage you manage to inflict during your period. I didn’t enter the fray with a story of my own until I’d left home for college (and thus it was cool again to talk to Mom).

That Thanksgiving, as we stuffed the turkey, I told my Mom about sitting in a lecture hall taking an English midterm, identifying passages from Paradise Lost, and having to raise my hand to get the TA to take my exam so I wouldn’t have to walk in front of 100 students to turn it in. Then I asked the girl next to me for a piece of paper to cover the grapefruit-sized stain on my seat (this in the era before pads with wings).

“Atta girl,” my mother laughed, and poured me a glass of wine.

By Christmas, as we wrapped gifts, I told her about the boyfriend who refused to go camping with me during my cycle. “He says the bucks, during rutting season, have been known to—like, mount a girl on her period,” I said, wrapping a pair of slippers for him.

“Horse pucky,” my Mom said. “I think you better save the tag on those. This guy’s not gonna last, is he?!”

She was right. We didn’t even make it to summer, he and I, parting ways after an argument over a comment made by my women’s studies professor (I’d asked her if she’d ever heard the “randy buck” theory). She had laughed and suggested menstrual blood could be dripped along the perimeter of one’s garden to ward off the deer; I guess that would be the does, if the boyfriend was correct, and hopefully the bucks would come looking for me, but leave the tomatoes.

Three years ago, when my youngest was one, my husband and I headed to Canada to attend the wedding of one of my husband’s high school buddies. Poorly timed, as I was mid-cycle, bleeding heartily. After several wrong turns down verdant highways laden with maple leaf insignias and waterfalls (half-hour detours each), and I’d reminded my husband for the 3rd time I needed to stop and use the bathroom, I felt that familiar rush and realized it was futile.

A vibrant blood bloom greeted us from my seat in the rental car when we finally stopped. I began to giggle, resorting to the old trick: donning my husband’s sweatshirt around my waist, I charged for the bathroom. On the way back, I stopped and bought a handful of cookies from the vets manning the rest stop in at attempt to appease my husband, then rustled up the wet wipes from the trunk. Not so much to soak the blood up, but to soak it down into the cushions, another trick learned during the college days, desperately trying to clean blood out of the boyfriend’s bed before he woke.

Back at home, I stood in the doorway, watching my six-year-old daughter as she slept: golden curve of her tiny summer tummy housing ovaries packed with eggs waiting to be doled out over her lifetime, and sent heaven thanks that she has another six years, maybe five, if she starts menstruating like I did at 11. Will she, like me, bleed for seven days straight? Fill her shoes with blood like Grandma? Atta girl!?

Drifting off to sleep next to my exhausted husband that night, I pictured the couple who rented the car after us. Maybe on their way to Vancouver, stopping at an overlook, the wife leaving the back car door ajar in her haste to get the perfect photo of the sunset. Both of them at the black formica rental-car desk, trying to explain the damage, turning their miniscule digital camera screen to the agent to show him the photos of the buck--with a full rack of antlers--tearing at the back seat with his sharp hooves in some kind of maniacal trance.

OMG, such stories we women have to tell. I remember trying to teach a girlfriend how to use a tampon by giving directions through the bathroom door. My mom had bad endometriosis and her periods sometimes lasted up to 17 days. She had her hysterectomy just six months before I got my first period, so we never overlapped. In our family, the curse of the curse is bad cramps. I have fainted several times from the severity of my cramps. My poor daughter gets them, too.

BTW, I'm visiting you via SheWrites. I'm sorry your weather is still so cold. It's been beautiful here in Chicago all week long.

17 days--beyond atrocious. Steak must have been a regular sight at your dinner table. I'm so sorry we share the severity of cramps issue--before kids (BK) I had 3 hospital severe episodes; it has faded since I gave birth to the 3 kids (hormone restructure?), though I wouldn't advocate having kids to cure endometriosis...

and now I'm thinking about my poor daughter, who has yet to grapple with the issue...uh oh....holding my breath on her behalf...Thanks for coming by.

I love the part about attracting bucks!

Thanks Liz...just does out here on our hillside so far, one or two little ones in tow.

I am 24 and i am having the worst periods of my life... i had actually come online to see if hysterectomy is even an option for heavy bleeders like me... (Chuckle)..and thats when i tripped upon your blog.. :) ..i really liked your post... its sort of reassuring to know i am not the only heavy bleeder..

I remember when i got my periods.. i am from india..and well frankly.. sigh i didnt know about periods (i think i was 11)... luckily though i was the tallest girl in class and was a back bencher.. unluckily though i had the biggest crush on the boy sitting in the next bench...i bled out all over the bench... (Gross) and didnt know what was happening to me... eversince then i have started wearing sweaters all the time .. bleeding out is almost like a phobia now...


my heavy bleeding doesnt come from my mom.. it comes from my grandmom .. and an aunt who passed away (before i was born) because of a bleeding out and then being given the wrong blood :( scary.. i never got to meet her..my mom cant relate to me on this issue.. which is why i am grappling in the dark about how to handle it.. i end up soaking up like a tampon within 2 hours.. and my periods go on for a week generally... and on top of that i'm anaemic...sigh.. why god.. why???

dj, sounds like I got off easy!! Sweaters do the trick in the moment, but what can they do against the knowledge of the family story about your aunt, and bleeding out...sorry to hear about that. Sounds like you have a book topic right there. While I'm sorry we share the condition and the anemia, I'm glad you stopped by, and hope you are well.

I also enjoyed the rest of the story, "A Full Cellar." I had loaned out my copy of Zyzzyva at the time I posted, so I only had your line and not the story title posted, so I'm glad you stopped by and gave me the chance to put in the title here.

I've never had period issues...but I switched to tampons after I got bullied in class because I'd left the pocket of my backpack open and my (CLEAN)spare pad was visible.

I can't imagine having to go back to class day after day after that form of bullying! Boys or girls or both? I know both genders, across puberty, can be ruthless. I'm sorry to hear about it...and hope you made a comeback of some kind.