From the Unsharable Files: Self-Care, Hammers and Sex in a House with Three Children 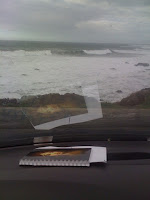 Warning: The following entry falls under The Reality TV banner. One could argue (and I often do) that certain states are better left uncaptured in words, photograph, or film, like that Stanley Kubrick movie (Eyes Wide Shut? Open? Lila, help me) in which he decides to be the first? to film a scene in which a woman pees on a toilet. Of course Nicole Kidman pulls it off, she’s wearing a stunning evening gown (I think…or was it a nightie)…So be duly advised, I’m no Nicole, just another mother of three trying to grub through the day with dignity…and when possible, with a little levity. (photo: journal, ocean at Bodega Head on tsunami warning day, March 2010).

From where I’m lodged under my husband, sunlight streaming across our torsos, I can hear the kids in the yard with hammers. Though we’ve given them goggles to wear for this latest rock crushing obsession, I thought we’d said Parents Present or No Go. On a “honey-I’m-finally-home” high, my husband’s voting for tuning their voices out, which I’m convinced he must have a special gene for, while I, at the opposite end of the spectrum, suffer from full libido lockdown. How romantic, I think, were I a husband to such a woman, whose final remark might as well be, “Can I get up now?”

And I’m thinking of the Sigourney Weaver article I read earlier at the dentist’s office (More, Jan/Dec 09/2010). Weaver describes her screen test for Alien, which included “ a scene that’s not in the movie where the Captain and Ripley have sex. I said to Ridley [director Scott] That is so ridiculous…” (and here I got called by the dentist…but to paraphrase and finish her sentence, Who could possibly think about sex with that monster on the loose?) Like I said, for me, it’s not so much a godforsaken motorboat headed monster oozing oil from his row of metal remote-control teeth, but the kids…the sound of their voices.

We persevere, until I can no longer deny that I’m burning internally. Which at first seemed like not a bad thing…but I mean, Burning. “Something’s wrong,” I say to my husband, to which he cocks his head to the window for a moment, and replies, “No-one is crying, they’re fine.” “No,” I say, “I mean, with me.” Then I remember yesterday at the health club, finally getting to an hour of “self-care”, I’d sank down into the swirling water, the air above the hot tub meeting my nose a cross between halitosis and dirty socks.

I said to the woman across from me, “Do you smell that?!” To which she replied, “Yeah, but it’s better than the slime that was in the corner of the tub yesterday.” I got out immediately, made a note to tell the staff, showered, and forgot all about it. Clearly the source of the burning. Given the seven day regime of sticky Monostat snow, I’ve switched allegiances to the steam room. Where the sound of the steam filling the room and the way it narrows my vision as if passing out makes me think I am passing out and visceral thoughts of Auschwitz flood my head so persistently I wonder if I’ve prematurely added the pressure of “relaxing and getting in shape” to my list of things to do on the way to putting myself together in order, now that two out of three kids are launched, to Getting a Real Job instead of Just Taking Care of the Kids.

At the dinner table, we notice a green/blue egg on our middle son’s forehead. He and his sister drop their eyes when we ask about it, further confirming our suspicions that a cover-up’s underway by silently eating all the carrots on their plates. “He…uh…did it to himself,” says my daughter. “Yeah,” says my son, “by accident. It doesn’t hurt, I swear, Mom.” The littlest will spill the beans the next day, you can count on him to crack: he was swinging the hammer and didn’t see his brother (doing little to convince me that sex while the kids are awake is ever a decent plan, as I’ve said oh-so-many times).

My husband waves such evidence aside with his carpe-diem approach to life, and takes more delight in their collusion—“Aw honey, look, they’re ganging up on us. Isn’t that cute?” I gather up the hammers and tuck them as far away as possible in the garage, and go upstairs to leave a voicemail for the maintenance guy at the club, stumbling over the phrase, “Gynecological Problem”, and forgetting to leave my name. Why, I convince myself, would he need to call me back anyway…For proof!?
Posted by Tania Pryputniewicz at 11:56 AM

You are always funny even when you don't try T. The last line was simply perfect.

Thanks Lila, for the support...How are the So You Think You Can Dance Chicago Auditions going over at Fondu TV (http://fondutv.wordpress.com)?

What a great title and post. Sheesh, it puts a whole new spin on multi-tasking. For what it's worth, I can totally relate. Moms and Dads, we're wired totally different.

I love your kids' rock crushing obsession -- I might just take that up myself.

I hope you feel better.

Great post -- really. The picture you paint of your family and all the shenanigans is charming and not at all as low-down as a reality show!

Thanks Elizabeth, I'll take your vote of confidence; and I do always run the posts past the husband, who, so far doesn't mind the limelight. I know there are all kinds of debates raging right now, at NY Times, and others, about mommybloggers and what we share. One could get positively stymied and write nothing...better to risk, respectfully, I guess, is how I feel today.

This is hysterical! So open & honest & relatable....wonderful...